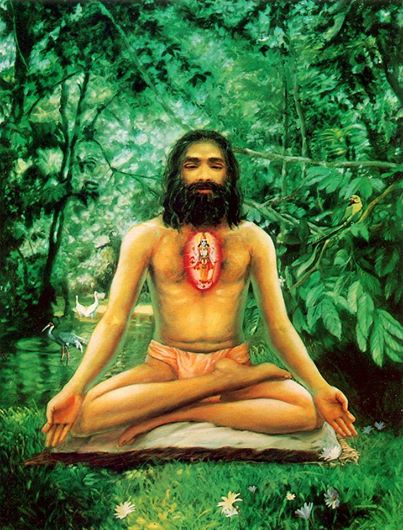 Of these two, Kesidhvaja was a great devotee of the Lord and Kandikya was a pious King and a great expert in performing sacrifices and fruitive activities.

Once a great war arouse between the two kings and in that war Kesidhvaja emerged victorious.

Kandikya felt humiliated on losing the battle and he retired from him his Kingdom and went to the forest to practice great austerities for self realization.

To gain knowledge of these sacrifices, he went to the forest to meet Kandikya, who explained him the art of performing sacrifices.

The King was very pleased with the answers and asked Kandikya, “Please tell me how I can serve a great person like you”.

Kandikya in turn asked the question, “Please tell me how to control my mind and senses which are presenting a great challenge to me “.

The King replied, “For controlling the mind and senses one should meditate exclusively on the transcendental form of the Supreme Lord which is the subhasraya (most auspicious object of meditation).

The forms of the material world (like the humans, matter and devas) are not prescribed for meditation because they have two main flaws

1. The forms are acquired by the individuals because of karma and hence are not natural forms and

2. The forms are subject to destruction by the force of time.

However the Lord’s form is not a product of karma and so is eternal.

So by meditating on His form, one can subdue His mind and senses”.

Kandikya being pleased with the answer offered obeisances to the King.

From the above mentioned story, we understand that one should meditate on the Lord’s form in His manifestation as deity or His pictures or His instructions in the scriptures.

Another important point is though Kandikya is an expert in performing sacrifices and he was living a retired life in forest free of all responsibilities, he was having a tough time conquering his mind and senses.

This is because he was not trained in meditating on the form of the Lord.

He had to be trained by a devotee like Kesidhvaja to learn this science.

Kesidvaja, though not very knowledgeable in the art of sacrifices and though having a big responsibility of ruling the Kingdom, was able to have control over his mind and senses because of his ardent devotion to the Lord.

He was able to instruct Kandikya about the science of devotional service.

This shows the power of devotional service to the Lord.