Once Narada Muni could see that Kali yuga was going to come very soon.

So he thought he will ask Krishna what was the solution for this so he went to Dwaraka.

That time Krishna was staying at the house of Satyabhama and he had to inform Rukmini that He was going to her palace.

So she had cleaned the palace with all her maidservants and she got the kids dressed up.

She got the pandits there to chant Vedic mantras.

She had filled water pots and banana leaves also trees of sugar cane.

She did everything she could to make an auspicious welcome to Lord Krishna.

When Krishna came from house of Satyabhama He was given a real good welcome.

Rukimin sent the children to embrace their father. Then she took Him inside to the inner quarters. She had a special swing for Him, for Krishna. So she began to do abhishek, puja for Lord Krishna bathing His lotus feet.

Then she started to cry. Krishna was amazed that why somebody is greeting Him and at the same time crying.

So then He asked Rukmini, “Why are you crying? Is it that some servant argued with you today? Children did not listen to you? What is the reason why you are crying?”

She said, “I am crying because You came to my house but one day You will leave. If You promise You will never leave my house then I won’t cry.”

Like this He tried to pacify her. He brought her next to Him and wiped the tears from her eyes.

In this way by appearance of Narada Muni, Krishna was saved from the embarrassing situation with Rukmini devi.

So along with Rukmini they bathed the feet of Narada Muni. They had a special Guru asana and they sat him on the Guru asana.

Krishna saw that Narada Muni was disturbed so He was wondering, “How is it that today My wife is crying, my Gurudev is disturbed. He is always peaceful.”

So He asked Narada Muni, “Why are you disturbed?”

Like this the symptoms of Kali yuga are beginning. So that means Your presence is fading off. Soon You will leave this world. Then Kali yuga will begin. So I want to know what is Your solution for the conditioned souls. How will they get delivered Kali yuga? I am very concerned about the Kali yuga souls!”

Then Lord Krishna said, “Rukmini said the Radharani knows what she is feeling and you are concern about the deliverance of the fallen souls of Kali yuga. So I will come again in Kali yuga. I will take the mood and the color of Radharani to understand mind of Rukmini and to solve your concern.”

So He predicted that He would come again as Gauranga in Kali yuga.

He told Narada Muni to tell all the Devas to incarnate in Bengal.

In this way we will flood the world with harinam sankirtan.

So like this Narada Muni went to the different planets to invite the people to come down to join Sri Caitanya Mahaprabhu’s sankirtan movement.

Then he went to Jagannath, Baladeva and Subadra and they advised him to go to Brahmaloka and from Brahmaloka Lord Brahma came as Haridas Thakur.

Narada went to Svetadwip and Goloka Vrindavan and there he saw Lord Caitanya being bathed by the queens of Dwaraka and the gopis of Vrindavan.

So then he paid his obeisances and Lord Caitanya was surprised why Narada Muni was coming from the planet of the four-headed Brahma – catur mukhi Brahmaloka.

So he took him aside and asked him, “What’s up?”

He said, “I am concerned that You are leaving the planet as Krishna and Kali yuga will begin.”

So he asked Lord Caitanya what He would do to save the people of Kali yuga.

Lord Caitanya told all the gopis and Radharani that, “I am going to go into the four-headed brahmanda and spread love of Godhead everywhere. Who of you are coming with Me?” So everybody wanted to come.

( As told by Jayapataka Swami on topic of Caitanya Bhagavata ) 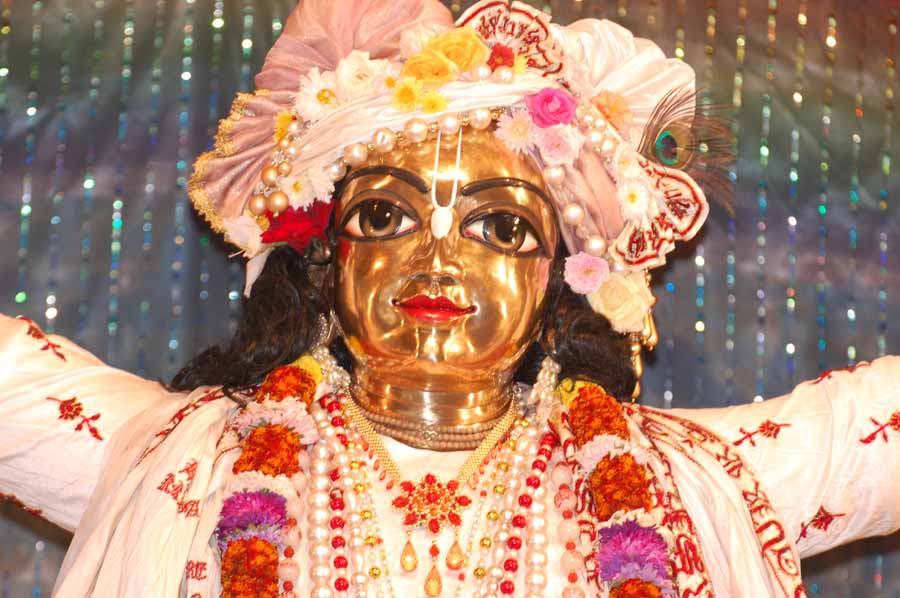