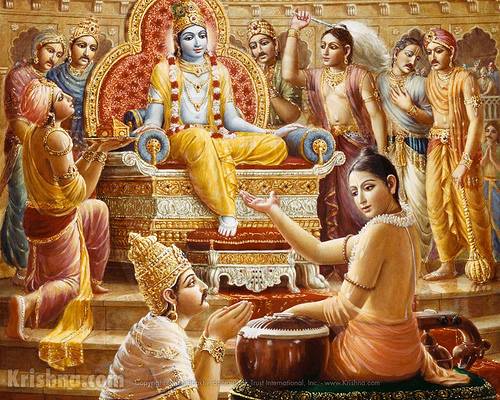 One day Sri Krishna and His devotee, Narada Muni, were together in a beautiful forest. They were sitting among the trees next to a little river, which glittered in the sunlight.

All the animals in creation gathered around Krishna and Narada Muni, delighted to be in the presence of the Lord. There were songbirds, peacocks, swans, squirrels, deer, foxes, tigers and many other creatures. And being in the presence of the Lord, they were so full of love that a deer laid down next to a tiger, and a fox affectionately licked a squirrel’s ear. The devas were there as well. It was a special moment for everybody. Krishna was smiling blissfully, and everyone was happy.

Narada Muni’s heart was overflowing with devotion towards the Lord. His hands were caressing the holy feet of his Beloved.

All of a sudden, Krishna looked deeply at Narada Muni. To test his spiritual understanding, He asked him, “Narada, what do you think? What is the greatest thing there is?”

All the fish that were swimming in the river jumped playfully in the water when they heard this because they were on their way to the ocean. 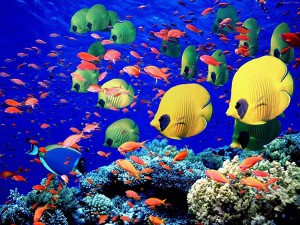 But Krishna replied, “Narada, how can it be? Don’t you know that the ocean is surrounded by land?”

Narada Muni said, “Sorry, my Lord. You’re right. It cannot be. In that case, the mountains must be the greatest.”

The squirrels were satisfied by this answer because they loved to run and play in the mountains. They giggled and said to each other, “Squeak, squeak, squeak,” which in their language means, “Yes, yes! Very good!” 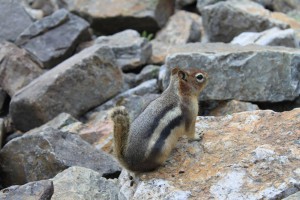 But again the Lord replied, “No, Narada. How can that be? Don’t you see that the mountains are limited and the sky around their peaks are much greater?”

“I’m sorry,” said Narada, becoming red in the face. He was astonished at his own ignorance.

But still, he wanted to please the Lord. So he said, “My Lord, now I understand that the sky is the greatest thing there is.” All the birds chirped in delight when they heard this. 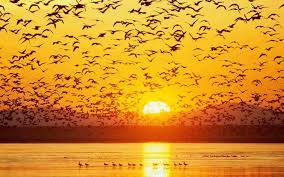 But Krishna was not happy with this answer. He said, “No, Narada, you failed again. Don’t you know that Heaven is beyond the sky?”
Narada said, “That’s it! Heaven is the greatest thing!” The devas who live in Heaven were so happy to hear this that they flew about making somersaults. 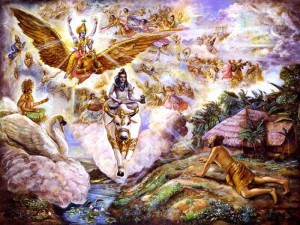 But Sri Krishna just shook His head. “No,” He said. The squirrels felt so sad for Narada. One of them started to cry. But Krishna smiled at the squirrel and gave him a nut to make him happy.

Narada felt defeated. He said, “Sorry, my Lord. You are right. It cannot be.” Narada said to himself, “Now, let me think deeply because I don’t want to fail again. Is there anything that can be greater than Heaven? Hmmm…” So he thought and thought.

The peacocks spread their wings displaying all the beautiful colours of the rainbow, hoping to inspire Narada. But he couldn’t come up with an answer.

Narada, who loved the Lord more than anything in the world, was deeply moved. He took the Lord’s hand and held it to his cheek. “Oh, my Lord, thank you so much,” he said. “I didn’t know that.”

The squirrels, who like all the other creatures were greatly devoted to Krishna, reverently folded their paws and said, “Squeak, squeak, squeak,” which means, “Thank you very much, Krishna! We also didn’t know that.”

The animals were very happy, and they all bowed to the Lord. The birds chirped, the peacocks danced with their beautiful tails spread out, the deer skipped about, the foxes smiled and wagged their tales, and the tigers purred very loudly. And because they loved Lord Krishna so much, they all lived happily ever after.

It is so clear as Lord Krishna say in Bhagavad gita that he can be only achive by bhakti – devotion ( Bhakti mam abijananti ).

PS: I humbly request all the devotees to please forward
moral / instructive stories they hear so that everyone can be benefitted