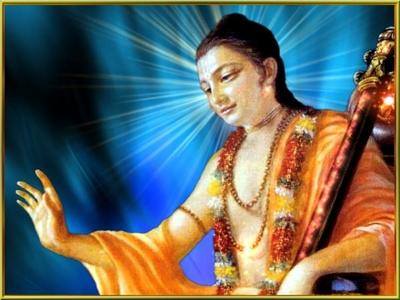 Once Narada asked Lord Krishna, What is the greatness of your Mantra? Please explain in detail so that one and all can understand.

Krishna said, I cannot explain to you the greatness of this Mantra but I can make you realize it!

Then Krishna told Narada to chant Om Namo Narayana in the ear of a worm. Narada did so and to his surprise the worm immediately died.

Narada went to Krishna and reported what happened.

Krishna asked coolly, Is that so?

Now repeat this to that butterfly which is sitting on that flower.

Narada did so and the butterfly died immediately.

Narada got worried and informed Krishna about this.

Krishna again asked, Is that so? Now repeat this to that deer.

Again Narada repeated the mantra in the deers ear and it died too.

Narada got very much perturbed and went to Krishna and told him, “Your Mantra is killing the animals too. I uttered the mantra and the deer died.”

Krishna replied, “Oh is it? Now repeat this to that calf.”

Then Narada asked, What is this? Do I have to utter the Mantra and kill the poor calf also ?”

Krishna said, Do as I say�.

Narada repeated the mantra on the calf�s ear and it died immediately.

Narada got very much agitated now. He thought to himself, I am proving myself to be a mischief maker. What do I now?

He reported about the incident to Krishna and Krishna asked Is that so? Now go to Kasi. The king of Kasi has been blessed with a son.

You say this mantra in his ears. Narada became very much worried but he didn’t want to disobey Krishna’s order. He was very much honoured by the king of Kasi. He asked Narada to bless his son.

Narada started trembling but somehow got the courage and recited the mantra in the childs ears. And the wonder of all wonders the child sits up and talks, Oh great Narada, you have saved me in all my previous births by uttering Om Namo Narayana in my ears. Have you not yet understood the power of the Lords name?

Narada returned to Vaikunta and fell at the Lords feet and told Now I have truly realized the potency of your transcendental names!

The moral of this story is that we can cross over the material miseries of birth, death, old age and disease easily if we hear and chant Krishnas names with love and devotion..

In the purport to Srimad Bhagavatam 1.8.4, Srila Prabhupada nicely explains that the stringent laws of material nature cannot be altered by any living entity. The Lord makes all the law and order (dharma), which are clearly declared in the Bhagavat Gita. So we have to follow those instructions only, which will make everyone happy, both materially and spiritually.

Unfortunately we are under the influence of maya, we accept this spotlife of only a few years as our permanent existence and thus we are illusioned by our material possessions such as family, house, land, wealth etc. And we are very much attached to these illusory possessions and serve them instead of diligently serving the Lord.

So, what is the solution?

Cultivating spiritual knowledge by chanting Lord Haris name will alter this situation. We can realize the potency of the Lord’s transcendental names from the above story.

Naradas doubts in this story refer to the doubts we have in this material world. If we can overcome these doubts and chant with faith and devotion then we can progress with determination in our spiritual path.

In the purport Srila Prabhupada says, “This clearance of the misgivings of material existence at once takes place by association with the Lord’s devotees, who are able to inject the transcendental sound into the depths of the bewildered heart and thus make one practically liberated from all lamentation and illusion.”