Story: Guru Nanak and doing good to others! 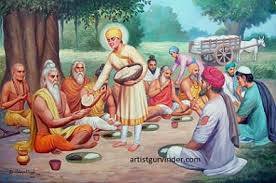 At the age of eighteen, Guru Nanak Sahib Ji, was sent by his father Bhai Mehta Kalu Ji to the city to do business.

His father was disappointed that Guru Sahib’s mind was not into farming and other worldly work, therefore, he thought perhaps engaging him in trade would firstly, be a good profitable profession, and secondly his son would be happy all day talking to his clients about his business.

Pita Kalu Ji gave twenty rupees ( In That time big money ) to Bhai Mardana Ji and said, “Go with Nanak. Buy and bring some genuine goods by selling of which we may make profit. In this way if you make a profitable transaction, next time I will send you with more money to buy goods.”

Guru Nanak and Bhai Mardana Ji started from Talwandi towards Choohar-khaana to purchase some merchandise.

They had hardly gone ten or twelve miles from the village when they came across a village affected by disease, where the people were thirsty, hungry and sick due to lack of water and an outbreak of disease.

Guru Nanak took all the money from Bhai Mardana Ji and took it to the next nearest village dwelling, where he bought plentiful supply of food and brought water for the disease-ridden village. Guru Sahib invested the twenty rupees into what we today call “Langar.”

As well as bringing food and water to the villagers, Bhai Mardana Ji and Guru Sahib brought clothes for with the money that was left. Taking leave from the villagers, they started back empty-handed.

Mehta Kalu was very angry that they had wasted money on feeding, clothing and taking care of needy people. Putting aside all work he took Bhai Mardana Ji along and started towards the well. Reaching the well, he caught hold of Guru Nanak and slapped Guru Sahib.

For Pita Mehta Kalu Ji, amassing of wealth was the only true bargain because in this world it is money which is the mark of nobility, it is the wealthy who is wise, only the rich are considered gentle, honest, pious and lovers of mankind. The means by which the money has been earned are of no consideration. Only those who make true transaction think about the ways and means.

The true bargain of life is sharing one’s earning with the needy and helping in whatever way we can.

PS: I humbly request all the devotees to please forward and share this

moral / instructive stories they hear so that everyone can be benefited by hearing about Krishna and his dear devotees.