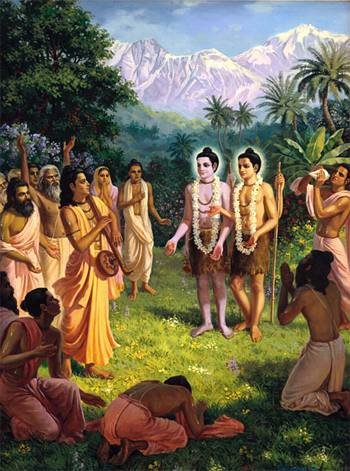 A Segment of the Santi Parva of Mahabharata

Next, Bhishma related this history. During a Satya-yuga of the Svayambhuva manvantara, the great sage Dharma had begotten four incarnations of Lord Narayana. These were Nara, Narayana, Hari and Krishna. Hari and Krishna were to first to undergo severe austerities at Badari, and then, later on, Nara and Narayana also did so.

Narada Muni once came to see Nara and Narayana and asked, “O foremost of rishis, who is it that you are worshiping?”

Narayana Rishi replied, “My dear Narada, we are meditating upon Lord Vishnu, for He is the Supreme Absolute Truth.”

After hearing this, Narada Muni made up his mind to go to Svetadvipa to see the Supreme Lord directly. After worshiping Nara and Narayana Rishis and receiving worship from them, Narada Muni set out, and when he arrived at the peak of Mount Meru, he rested for awhile. From there, Narada Muni could see Svetadvipa within the ocean of milk, toward the northwestern direction. In that transcendental abode of the Supreme Lord, all of the residents have four arms and effulgent white complexions.

At this point, Maharaja Yudhisthira interrupted because he wanted to hear more about the residents of Svetadvipa. In reply, Bhishma referred to the talks of the great sages Ekata, Dvita and Trita with Brihaspati.

Ekata, Dvita and Trita said, “After being born from Lord Brahma’s mind, we had gone to the North. There, we had performed austerities for thousands of years, and at last we began to stand upon one leg, just like stakes in the ground. While standing on the shore of the Milk Ocean, north of Mount Meru, we desired to see Lord Narayana in His original transcendental form.”

“At last, when our austerities became mature, we heard a very deep and sweet voice speak to us from the sky, and that transcendental sound filled our hearts with great joy. The voice informed us, ‘O rishis, there is a white island known as Svetadvipa near the northern shore of the Milk Ocean. There, Lord Narayana lives along with His pure devotees, who have no other desire or engagement than service at His lotus feet. You should go there and see how the Supreme Absolute Truth is being revealed in His personal, transcendental form.'”

“After hearing this, we journeyed to Svetadvipa in great eagerness, but after arriving there, we could not sec anything because of the Supreme Lord’s blinding effulgence. Thus, we could understand that no one is able to see the personal feature of the Supreme Personality of Godhead unless he is sufficiently qualified. Being undaunted, however, we sat down there to worship Lord Vishnu and perform austerities to further purify ourselves.”

“Finally, after one hundred celestial years, we began to see wonderfully effulgent personalities having white complexion and possessed of all auspicious bodily features. They kept their hands joined as if they were praying, and we could hear them constantly chant the holy names of the Lord.”

“Next, we saw an intensely concentrated effulgence approaching and all of the residents of Svetadvipa began to joyfully run toward it with their hands joined in a reverential attitude. We began to lose consciousness, however, due to the great energy that emanated from that concentrated effulgence, and because of this, we also lost our vision. We could only feel the fragrant breezes and hear the combined sounds of the devotees as they glorified the Lord. Thus, even though the Supreme Lord was present before us, we could not see His personal form because it was covered by His Yogamaya potency.”

“In this way, we had the chance to personally experience what we had already learned from shastra–that the Absolute Truth, although non-dual, is realized progressively in three features–as Brahman, Paramatma, and Bhagavan.”

“This can be compared to the progressive stages by which one understands the sun. First of all, one can see the glaring all-pervading sunshine. Then, one can understand that this energy is coming from a localized source. In other words, that which had appeared to be formless is realized as emanating from a specific form. Finally, if one is able to enter the sun planet and receive the mercy of the presiding deity, Surya, then he can understand that in reality, everything is emanating from him.”

“Similarly, the brahmajyoti is the all-pervading effulgence of the Supreme Lord’s transcendental body. Paramatma is the Lord’s localized expansion upon whom the yogis meditate within the region of the heart. Bhagavan is the Supreme Personality of Godhead, Lord Krishna, who resides in His own abode and who expands Himself unlimitedly.”

“Thereafter, when the Lord left that place, the fragrant breezes stopped blowing and the sounds of glorification ceased. After regaining our senses, we opened our eyes and saw that we were amongst thousands of the Lord’s devotees, although none of them paid the slightest attention to us. We were already very weak because of our prolonged austerities, and due to being neglected like this, we became somewhat depressed.”

“Then, from the sky, a voice informed us, ‘O rishis, only those that are qualified by unalloyed devotion are able to see the personal form of the Supreme Personality of Godhead. Such pure devotion is characterized by one’s being devoid of any desire other than to render undeviating service to the Supreme Lord with one’s body, mind and words. In other words, the pure devotee has no desire to materially benefit by engaging in fruitive activities, nor does he wish to become liberated by merging into the Lord’s effulgence. The pure devotees only desire to serve the Supreme Lord, without personal motivation, in any condition of life, whether it is in the material or spiritual world. Due to having developed unalloyed love for the Supreme Lord, the pure devotee has no room in his heart for any other desire than to simply please Him. This elevated condition of life can only be achieved when one surrenders unto a pure devotee of the Lord and receives his mercy. Only in this way can one hope to one day come face to face with the Supreme Personality of Godhead. My dear sons of Brahma, please return home now.'”

Bhishma resumed the narration that had been interrupted by Yudhisthira’s request to hear more about the residents of Svetadvipa.

From the peak of Mount Meru, Narada Muni resumed his journey to Svetadvipa. Upon his arrival, the devarshi met all of the residents of that white island, and after worshiping them, he accepted their worship in return. Then, in the hopes of meeting Lord Narayana, Narada Muni began to perform austerities by keeping his arms upraised, and as he did so, he recited prayers in glorification of the Supreme Lord.

Before long, Lord Narayana appeared before Narada Muni in a wonderful form possessing hundreds of heads, arms and trunks. As Narada Muni bowed down with great awe and veneration, the Lord spoke to him: “My dear son of Brahma, the rishis Ekata, Dvita and Trita had come here in the hopes of seeing Me, but they were unable to do so. In fact, no one is able to see Me unless his heart has become completely purified by having rendered loving devotional service unto Me.”

“My dear Narada, I consider you to be the best of My pure devotees. Therefore, I am ready to fulfill whatever your heart may desire.”

Narada Muni replied, “My dear Lord, just to see You is in itself the highest benediction, and I consider it to be ample reward for whatever austerities I may have performed.”

Lord Narayana then said, “Narada, I exist along with My associates in a transcendental position, beyond the manifest and unmanifest conditions of material nature. Therefore, I cannot be perceived by materially tinged senses. To come to Me in My eternal transcendental abode is the complete stage of liberation, whereas merging into My glaring effulgence is partial and impersonal. Indeed, it is a kind of punishment for those spiritualists that, out of envy, do not surrender unto Me.”

“O Narada, I have revealed My universal form to you so that you can graphically experience how the entire universe, and all of the living entities contained therein, from the tiny germ up to Lord Brahma and Lord Shiva, are all My parts and parcels, and are resting in Me.”

After describing Himself in this way, Lord Narayana suddenly disappeared from Narada’s vision. Narada Muni then went to Badari, to see Nara and Narayana Rishis. Thereafter, Narada Muni recited Lord Narayana’s words to the Siddhas residing in Brahmaloka, and this treatise became known as the Pancharatra shastra.