Narada muni. Narada bring a fight between Siva and Vishnu 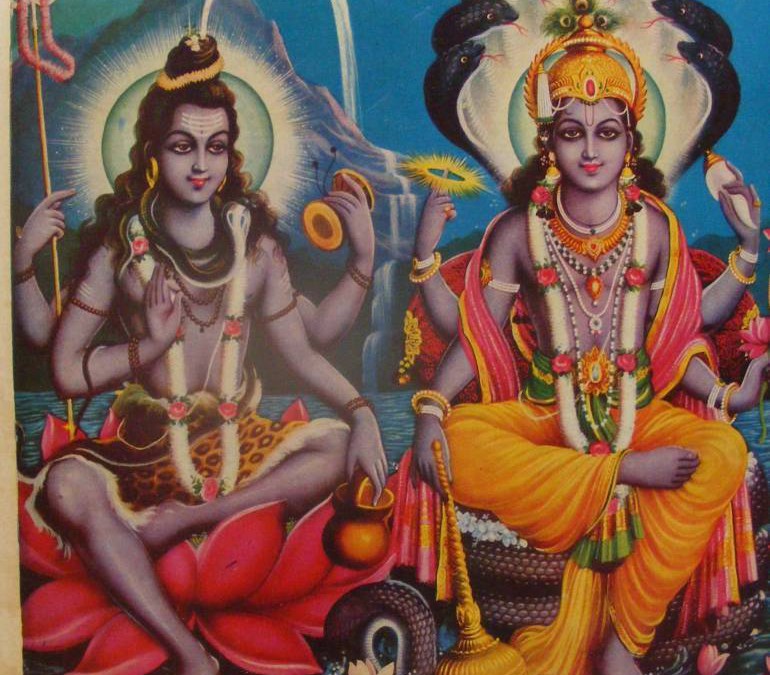 superior among the two.This story is available in puranas.

Once there was a battle between Vishnu and Shiva. There was no cause for

this, it was just Narada Muni’s jubilation. Narada was once in the assembly of

Indra, and Indra was praising Mahadeva. He was saying, “Lord Shiva has three

eyes, and fire comes out of his third eye and all that.”

So Narada Muni said, “There are so many Shivas. In every universe there are

eleven Shivas. My Lord is different. He has no third eye but He knows

Then Indra said, “No no no, you don’t know. Vishnu is alright, he’s the

avatar, but Shiva is the great powerful person.”

“If it is so,” Narada said, “Why don’t you go and ask Shiva to have a fight

with Vishnu? Then we will see who is more powerful.”

Then Indra thought, “That would be a nice thing to do,” so he went to

Shiva’s bull, Nandi, was asking, “What are you doing on Kailash? This is

meant for people who meditate.” Nandi is a great yogi, and an astrologer

too. He saw Indra and knew there would be trouble, so he said, “Get out of

Kailash. You are an enjoyer, so what are you doing here?”

Indra said, “No no, I have only come here for Shiva’s darshana without any

Nandi said, “I am an astrologer, and I can see on your face that you have

come here to create trouble. Don’t give any trouble to my Lord, he is

Then Indra said, “Let me in Nandi.”

So he was allowed. When he came in, Shiva was in deep meditation. Indra came

in there and prayed to Mahadeva so much, and finally Shiva opened his eyes.

“Indra! Why are you here? There is no trouble happening. I don’t think you

have come here to ask me to fight with someone.”

Indra said, “I must say that I only visit Kailash to ask you to fight with

someone, but this time it’s not a demon.”

“Who is it then?” Mahadeva asked.

“Well we had a little argument,” Indra said. “Myself and Narada. I said that

you are the most powerful, but Narada said that Vishnu is the most

Shiva said, “You see this japa-mala I am holding? Do you know what I am

doing with this? Do you know what I am chanting?”

“I heard that you chant Rama’s name,” Indra replied.

Shiva said, “So I am chanting Rama’s name. And then you are asking who is

name. But it would never happen, I am chanting His name.”

Indra said, “That is right, that is Purana, but I want to see it.”

Shiva said, Why do you want to see it? I am telling you, He is the most

powerful and all power comes from Him. I only destroy this universe, that is

all the power I have.”

So Indra said, “Even though you say these things, I don’t believe it.”

“Why don’t you believe it?”

Then Shiva said, “I know what you are up to. You want to have some

entertainment. So you go to Visvakarma and ask him to make a bow for me. I

am a babaji, but you want me to fight. So at least give me some weapons.” So

Visvakarma used his mystic power and made a bow. This bow was so big that

300 people had to carry it. Actually it was in a cart. The cart had so many

wheels, and 300 people had to push it to move it an inch, and then they had

to rest for half an hour. So this was the size of the bow. It was unstrung

also, the thread was separate. So that was brought in front of Lord Shiva.

“This is a good bow,” the said, and took it up. When he took it up all the

demigods fainted. It was such a huge bow and Shiva was just lifting it so

easily. Then Indra was saying, “See? I told you, he’s very strong. Don’t

think that he’s just a babaji meditating. He’s got so much strength.” Shiva

then strung the bow and he said, “All right, I am ready.” Then they went to

Vishnu was sitting there in the Svetadvipa, and he said to Laksmi, “I wonder

what Brahma is calling for now?”

Lakshmi said, “Maybe some demon is there.”

“How can a demon have come without My knowledge? There is no demon,” the

“Then You must also know why he is calling You,” Lakshmi said.

“Yes I do. He wants Me to have a fight with Lord Shiva.”

“Then I’ll have to do it,” the Lord said. So then He got up from His seat

and He came to the other side of the milk ocean. He said, “All right Brahma,

And then Indra said, “But there is one condition – You don’t bring any bow

or anything from Your spiritual world. We will give You something from this

world. Otherwise You will overpower him easily, we know that. We want a

So Visvakarma made another bow. Shiva’s bow was called Mahesha-chapa, and

Vishnu’s bow was called Vishnu-chapa. Both were made by Visvakarma and were

equal in strength. They were exactly the same. They were copies. So Vishnu

came and said, “No problem, I will take it.” So he took the bow, and he came

When he lifted the bow, because He has got an eternal associate called

Sarnga, who is His bow, and when Vishnu touches any bow Sarnga will come in

there and it will become Sarnga-dhanu. He took the bow and Sarnga entered.

Nobody could see this happen.

So He came and Shiva was there, and as soon as Vishnu was in vision of

Mahesha, Shiva offered his obeisances and clapped his hands, rolling on the

floor in ecstasy. Indra said, “What’s going on?” He turned to Narada Muni

and said, “Go and tell him to give up his devotion and fight!”

Narada Muni went to Shiva and said, “You have forgotten that there is

supposed to be a fight. You have surrendered”. So then Mahesha said,

“Please, bless me so that I can fight with You.”

Vishnu blessed him, “All right. You can fight with Me.” So they were

Shiva put the bow down and started running away from the battlefield, and

all sorts of astras were coming out of Sarnga, and Shiva ran away. He ran,

and he was shouting to Indra, “I told you! I told you! Now I am in trouble!”

Of course, Vishnu was not angry, was only smiling. But then all the demigods

prayed to Vishnu, “Please stop the war. We need Lord Shiva.” So then the war

was over, and Shiva was saved. Unquote -

it is clear that there was a fight between siva and vishNu. The reason alone

was not clear. The confirmation for a fierce fight, which took place between

in vaalmeeki raamaayanam. These slokams will be given in next post as this