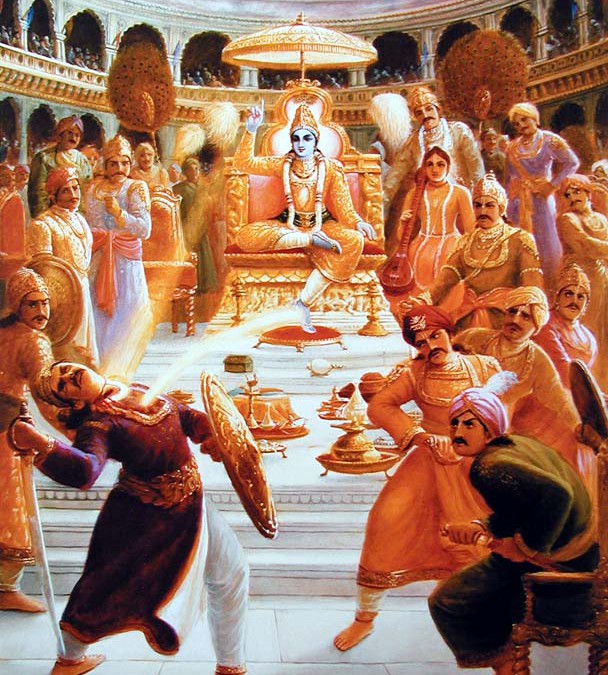 When Yudhishtira was conducting Rajasura Krishna had to kill Shishupala. As the latter died, a sivine light left his body and it entered Sri Krishna’s divine being. Yudhishtira was surprised at the phenomenon. Sage Narada was therein the assembly and Yudhishtira asked him ” O holy one, Shishupala had developed hatred towards Sri Krishna sincechildhood. He was destined to go to hell. How did he go to heaven? What is the secret of this? Please enlighten meon this.”

In answer to this, sage Narada dwelt in detail about the divine deeds of Lord Hari. He does not hate anyone. Whenthe world fails to bear the weight of wickedness he takes avataras to restore the balance by killing the wickedand protecting the righteous. The punishment he gives is in a way a boon. This Shishupala and his younger brotherDantavakra were the divine gate-keepers at Vaikuntha. They were cursed by great sages Sanaka and his brothers. Theyhad to take birth on the earth as Hiranyakashipu and Hiranyaksha, Ravana and Kumbhakarna and now as Shishupala andDantavakra and they had to be killed by the Lord to help them to go back to Vaikunta. They have gone where they belonged to. It is always beneficial to develop some kind of relationship with the lord.” Yudhishtira was convincedby the explanation.