Mathura Lila: Kubja and our hunchback!!! 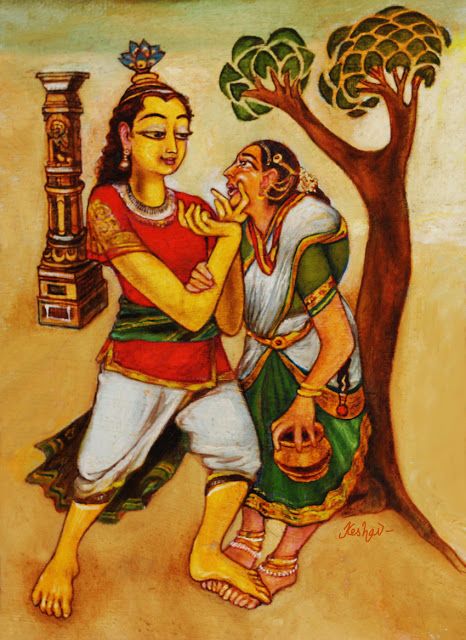 In Treta yuga, when Lord Ram along with His brother Lakshmana were in search of  Sita devi in the forest, at that time Surpanaka – sister of Ravana, got so attracted at the beauty of Lord Ram that she disguised as a most beautiful woman and approached Lord Ram to get His association.

But Lord Ram being a “Eka Patni Dhari” refused to entertain her and asked her to go to Laxman, who gently refused, saying that a slave has no right to please anyone else other than his master so how can he will ever please her, only the Master can afford to have more then one wife and He asked her again to go to Lord Ram.

In this way, she went here and there between Lord Rama and Lakshmana and finally got wild and tried to hurt mother Sita, at which Lakshman chopped her ears and nose.

This was not the end of the story.

Henceforth, the special mercy of Lord begins. From Rama lila we go to Krishna lila.

Since Surpnaka had developed Madhuriya bhava for Lord, in the next yuga when Lord came as Krishna, this Surpnaka came as “Kubja” (means one who is bent in 3 places with a hump).

AsKrishna entered Mathura  He came across a hunchbacked woman, her name was Kubja and Krishna saw her. She was bent down, her limbs were deformed due to her hunchback- she was quite unsightly. She had a nice face, but the rest of her body was in a diseased condition from an orthopedic perspective.

She was carrying the most fine fragrances and oils.

It was so nice that Krishna actually smelt it and was attracted to her. He came up to Her and Krsna revealed His own love to her, through His smile , through His charm, His glance , His form.

And while everybody in Mathura considered her very ugly, Krishna said “Oh beautiful lady what is this you are carrying”.

She explained that she was a servant of Kamsa and she introduced herself by the name Trivakra, bent in 3 places. Not like tribhanga – Krishna’s bends are very beautiful but Trivakra means hunchback bends.

Kamsa liked nothing about Kubja (Trivakra ) except that she made the best oils and he facilitated her by giving her the opportunity.

Understand that there was a big ceremony coming up  Krsna and Balarama were invited to the wrestling arena.

Kamsa had a big stadium created for this purpose.

His ministers, queens , generals and the most distinguished people as well as the common people of Mathura were all going to be present there.

On highlight festival Kamsa was conducting, he wanted to be his best. To look beautiful and smell beautiful.

Kubja made very very special mixtures of fragrant oils and cups for Kamsa on that day and he was expecting them from her.

He was a violent cruel dictator, if you did not do what He want- he ends your life immediately.

Everyone knows if I do not please Kamsa my life will be ended. So Kubja knew the sociology of Kamsa’s Mathura.

So here she was on her way to Kamsa’s palace to give him these oils and pulps for his pleasure.

And Krishna said give the best of these oils to me and my brother Balarama. Kubja was so happy, she said that these oils are only meant for you and your friends.

The two of you are so beautiful, you have captured my hearts that these oils are your property, for your pleasure I will give you everything that you want. This is the nature of her love.

Very similar to the Gopis. When Krishna played his flute under the Vamsi Vata tree on the bank of the Yamuna He was calling gopis for His pleasure. They did not consider the consequences to themselves they only thought what would be the best to please Krishna. They knew that they could be rejected by society, by family, by everyone, but it pleases Krishna so those things were not even something to consider in their minds.

So Krishna was so pleased because she gave the best. She had fearless.

So Krishna looked at Balarama and His friends, made them laugh and smiled and looked at Kubja and did something wonderful.

He placed His toes on her toes. With His feet covering her toes, then He took one finger from each of His hands and placed them under her chin and with a lovely smile, He very gracefully just pulled her head up and miraculously her back became completely straight. All her limbs were exquisite and she became absolutely, indescribably, incredibly beautiful.

She turned out to be most beautiful women and then Lord embraced her and by this embrace all her desire was fulfilled.

Emotionally, mentally, physically we all have our crookedness. Nityananda Prabhu saw the potential in Jagai and Madhai. Hanuman saw the potential in Ravana. Of course Ravana was not very cooperative. This is Krishnas vision. He descends in this world where there is so much crookedness , but He sees the spiritual potential in everyone. When Srila Prabhupada came to New York, we read in  Lilamrita and some of his lectures- these people that who were coming were like Kubjas very crooked. Taking all sorts of intoxication, illicit relationships, they were not seekers of the truth. Many of them were in a pitiful condition very crooked. They were not even Kubja  who come to Krishna with with nice fragrances…..they have bad fragrances.

Srila Prabhupada was seeing the potential in everyone and on behalf of Krishna – He did not say I will do this- I am your representative, through me I will make these people happy.

Through satsang, through hari katha seva, japa, hari kirtan- Krsna through SP was straightening this up making us beautiful- SP would say now they are bright faced.

So this is what a Vaishnava is, that he see the potential in each other , anybody could look at Kubja and say look at that UGLY hunchback with deformed limbs. The false ego makes it seem that we are really heroic, really learned, advanced because I have the power to condemn other people’s faults, to criticize.

That’s how material energy works, she gives us a certain satisfaction and a certain prestige – prajalpa at its worst- unnecessary talking – talk whimsically frivolously, the worst is when we talk about the faults of others because it gives me some morbid sense of value- that I can judge another’s faults- that gives me an esteemed position- that gives me some superior role.

Rupa Goswami says that the nature of a true devotee is the propensity to find faults with others no longer exists in the heart. So a Vaishnava , a true bhakta is one who sees the potential even when there is the hunchback and the deformation. Unless great souls see the potential in us- we have no capacity and hope to actually be straightened up and restored.

What was Kubja’s qualifications? – Krishna saw her potential and Krishna approached her and gave her the opportunity to serve.

Srila Prabupada saw the potential in us and gave us the opportunity to serve- whatever are our hunchbacks- he saw we were perfect devotees in the core of our hearth and he straightened us up.

This is how we are supposed to deal with each other.In a community of devotees  there are people with faults, with shortcomings and people that step on each other’s heads sometimes, so at the time of death its not going to mean anything to us.

We make things so significant , when they are so insignificant compared to what the real opportunity is. So this is what a community of devotees means. We are all trying to straighten each other up, its not that we sentimentally let people go on with their unfavorable activities.

But we see the potential in each other, we are all trying help each other to let Krishna through our Gurus lift us up and make us natural again.

So we can see everyone is like Kubja with such a potential – to be a beautiful lover of Krishna. -This has to brought out and restored.

Krishna with His two lotus hands and Lotus feet  he pulled her up – He is giving us the same opportunity- param vijayate- to become restored to our beautiful natural perfect loving condition- through the chanting of the Holy Name…… Hare Krsna ….as soon as she was straightened ecstatic conjugal love came in her hearts. When we are straightened- ecstatic intimate love- prema bhakti awakens in our hearts.

( Explanation given by Radhanath Swami )