King Story: King Kulashekara and offence to dust from the feet of the gurus

Kulasekara was a strict administrator; countenance was effulgent like a sun, heart like a wish full-filling tree, very charitable, in learning he was compared with Brihaspathi, tolerant like mother earth, beautiful as Kamadeva, pure in his mood and behaviour, wealthy like Kuvera.

He was very much surrendered to devas and brahmanas and was full of devotion for the spiritual master. On top of all this, he was constantly engaged in hearing hari-katha.

One day when the king was seated on his throne surrounded by his ministers, soldiers, sadhus and sanyaasis listening to hari-katha, his guru arrived. Immediately he left his throne and received him, offered prostrated obeisance, washed his lotus feet, arranged a nice seat to him. Then by order of his guru, the king also sat and continued hearing hari-katha.

While engrossed in the story, suddenly a fly came and sat on the king’s forehead. He felt uncomfortable and touched his forehead to chase away the fly. Immediately the fly flew away. But, while brushing his forehead to drive away the fly, some of the dust that was on his forehead stuck while paying obeisance to his guru fell to the ground.

When his guru saw this, he lowered his head so the king couldn’t see his face. But the king is very observant, and noticed the reaction of his guru. He asked his guru what was the cause of his apparent sadness.

The guru replied, “when one offers prostrated obeisances to his guru, he is immediately freed from the reaction of his sinful activities for as many past lives as there are dust particles on his forehead from paying his obeisences. Now you have removed those dust particles from your head. Can you imagine how much sin you have acquired by doing so? By touching your hand to your head, the dust particles fell back to the ground. That is why I feel sorry for you, because you have deprived yourself of being free from you sins of that many lives”

The king trembled, tears filled his eyes, hearing what guru said. When he came back to his senses, he found that the guru had left the palace. The king immediately asked his ministers, sadhus and learned brahmanas to find out the atonement for this sin and that he made a vow in the name of sun God that he would do it however difficult it could be.

They found that the remedy was going to be fatal for the king and so avoided telling him but he persisted to know. So, they said, if one removes the dust particles, out of pride, then he loses all sukriti, pious credits. To be free from this king of guru droho, he must perform the atonement..

So what he should do?

“A copper plate twelve feet long, three feet wide, and six inches thick – should place the copper plate on top of four pillars – put burning charcoal under the copper plate until it becomes as hot as fire – then one should offer his prostrated obeisance one hundred and eight times on that copper plate. Only then will he be free from the offence to his guru. This is as per the scriptures”

Will anyone dare to do the atonement (prayachiththam) as above even if he had committed an offence to his guru?

King Kulasekara became jubilant like full moon and his hair stood on end. He became so happy to know that this would cleanse him from the offense he committed against his guru.

King Kulashekar klimbed on the hot copper plate and started offering obesences and he was not feeling nothing. He started offering his dandavats and after some time Lord Jaganath appear before him and blessed king who happilly finish his vrata to be free from offence to dust drom the feet of the guru.

While we are going to wait to hear what happened, I wish to recollect how spiritually greedy we were when we visited ‘raman reti’ in Gokulam. That is the place where Krishna crawled, played, rolled over with gopas and gopikas, with mother, brother and friends. So, we too rolled over the divine soil that the particles of sand stick as much as possible on our body, face and head. I did not wipe them off till we reached our staying place in Vrndavan that night. So, the moral is that the dirt or mud too gets highly spiritualized in front of and in connection with the divine people. They mean so much in our eliminating or adding karmic reaction. 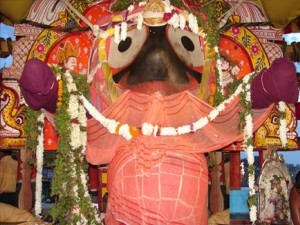 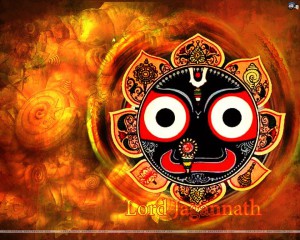