Faith story: Krishna is always ready to protect His devotees! 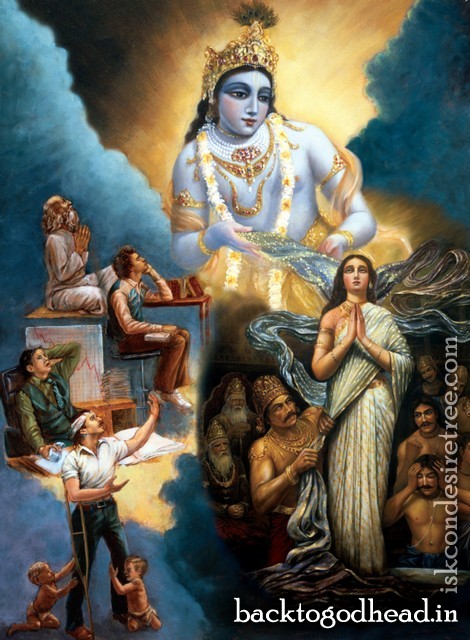 Once Krishna was having prasadam and Rukmini Mata was serving Him.

One devotee of Krishna was walking in the forest.

Suddenly a wild dog came and started attacking the devotee.

At that point,Krishna in Dwaraka immediately got up and He was ready to leave to help that devotee.

Then suddenly He sat down again and started calmly taking the prasadam.

So Rukmini mata was confused and asked the reason for this behavior.

Krishna explained the whole thing about the devotee being attacked by the dog and Rukmini Mata said why He did not go to protect him?

Krishna explained that He was ready to protect the devotee but the devotee instead of having faith in the Lord, he immediately picked up a big stone to throw at the dog.

So Krishna said that He could not tell the difference between the devotee and the dog. They were the same. They both are aggressive with intention to hurt each other.

Moral of the story;

We become agitated and angry when we do not surrender to Krishna. Then we have no faith that whatever has happened is Krishna’s will and that we should seek his shelter and help.

If we accept it, we do not become agitated, anxious and angry.

When you are anxious and agitated, you become angry.

When you are angry, your symptoms will be in anxiety and agitated.

All the three ‘A’s are on the foundation of one ‘E’ and that is envy.

Envy is coming from pride.

Pride is followed by envy and it is manifested full blown in anger.

Prthu Maharaj was a great personality, but a little bit of Indra’s presence in his life changed the course of his life.

How did such a great personality become angry, agitated and anxious?

Because Prthu Maharaj took the association of Indra. Asat-sanga.

How did he take the association?

He was not holding hands with Indra but he was meditating on Indra.

Prthu Maharaj’s mind kept on thinking of Indra and the more you remember that which causes you agitation and anxiety, unknown to you, like poison, that anxiety, that envy, also gets transferred to us.