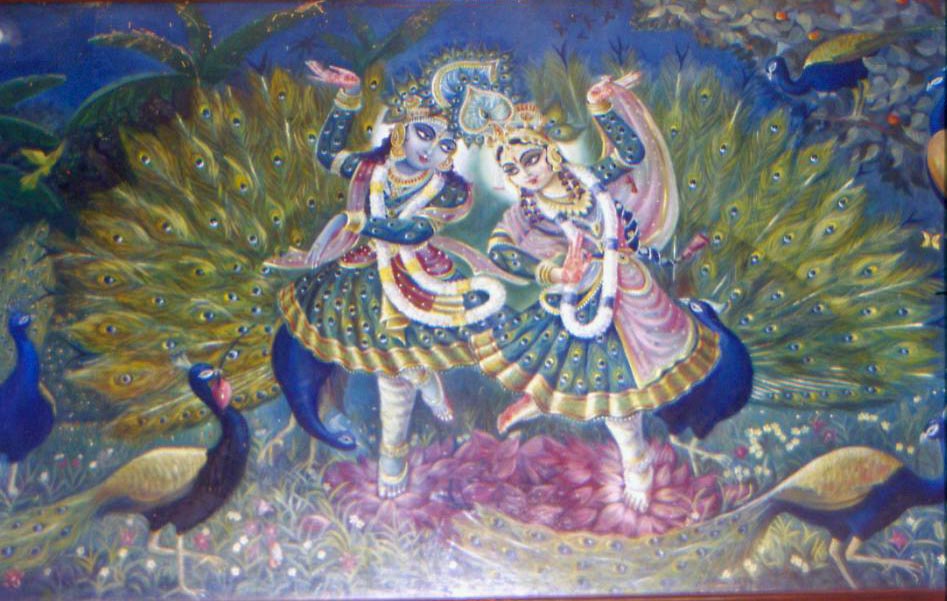 When one day Krishna woke first from a rest in the forest with his cowherd friends, he decided to wake
everyone and call the cows grazing at a distance by playing his flute. When Krishna blew the nectar of
his lips into the flute, a melodious raga with a slow rhythm and a deep base emerged from its end. This
wonderful vibration enchanted the peacocks in and around the Govardhan hills.

Their hearts began to sing in happiness and fill the skies with their own song. The resonant vibrations
from the flute encouraged the peacocks to dance. Krishna, who is the source of all dramatic arts, was
pleased with their dance and encouraged them by his kind glances and sweet smiling. They cried with
joy and it sounded all over the hills. In time, their sounds became indistinguishable from the echoes.
They became excited and jumped up and down, flapping their wings.

All the animals and cowherds of the Govardhan hills stood transfixed, unable to move their eyes away from the dance of Sri Krishna. The flute in Sri Krishna’s hand seeing the uncommon performance of its master began to sing on its own.

The spectacle was extremely splendid when seen from the top of the Govardhan hills, the heaven and
even the netherland. They danced for a long time and slowly the tired peacocks stopped dancing.

Then Krishna danced to the rhythm of His own steps. After many days, when he stopped dancing, there was an enchanting silence.

The king of the peacocks approached Sri Krishna with great humility, bowed down his head and said,
“You have created a festival of bliss for which we remain eternally indebted to You. It is our duty to
offer you ‘Gurudakshina’. I request You to accept our only opulence, our plumage. Wear them on your
crown as a decoration.” With large tears of ecstasy, the king of peacocks dropped many divine feathers.

SriKrishna lovingly accepted the offering of the peacocks and picked up the feathers and to everybody’s
joy, placed a few of them on his turban. Thus he came to wear the peacock feathers.

This story show how we should offer the best thing we have to Krishna. Not just things we dont need. Also this is story of appreciation. When we get someting from others we should be very thankful even if it is very insignificant. It is sign of love and therefore have great value. Krishna has put on his head plumage from peacocks to show his gratitude for service they have done for him by dancing.

PS: I humbly request all the devotees to please forward moral / instructive stories they hear so that everyone can be benefited.