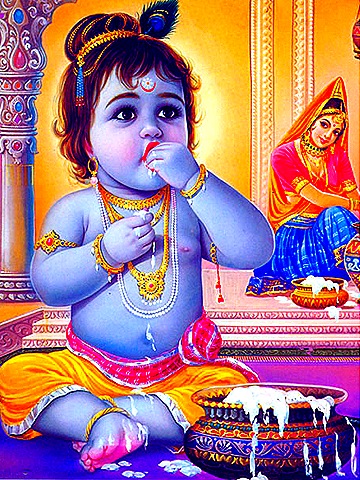 From His birth Krishna loved to taste butter.

Knowing that, his devotees would always bring him some fresh butter.

But one day it happened that the Yamuna river was overflowing and he was on the other side of the river.

Gopis used to offer Krishna with butter everyday, it ached them not to be able to offer him some butter that day.

One of them remembered the name of sage Vyasa, they all went together to Vyasa to ask Him  for a miracle so that they could cross the overflowing river to Krishna.

“Krishna! Krishna!” Vyasa shouted, pretending to be displeased Vyasa continued “All I ever hear is Krishna! what about me? Who will feed me?”

Gopis were scared because Vyasa was a great sage, they were embaressed too for not offering him any and were anyhow going to take his help, so they offered him some butter, but Vyasa was not at all satisfied with little, he asked for more and more, until he ate almost all of what was brought for Krishna.

Gopis were unhappy that Vyasa had left only a small portion of butter for Krishna, but they dared not to show their discontent. “Alright” said the Vyasa and took them to the Yamuna river, “O Yamuna, if I have not eaten anything, divide up part and let these Gopis pass“.

Gopis could not believe what they were hearing, they had just seen him eat a bellyful of their sweet offering to Krishna. Yet, to their amazement, Yamuna parted and gave them their way through, now they could not believe their eyes.

However they ran quickly to the other side looking for Krishna, they found him sleeping happily in his hut. He wasn’t waiting for them as he did everyday. “Lord aren’t you hungry? we have brought the best butter we could get. Please eat it” said the Gopis.

Krishna opened his eyes slowly and said “Oh, thank you, but I’m no longer hungry. That fellow Vyasa, on the other side has already fed me too much”

“But how is it possible? he was on the other side, and he himself ate all the butter in front of us?” asked the Gopis

“Oh but you see, he was thinking of me constantly while eating it. He was connected to me through his contemplating one me, I ate through him” said Krishna