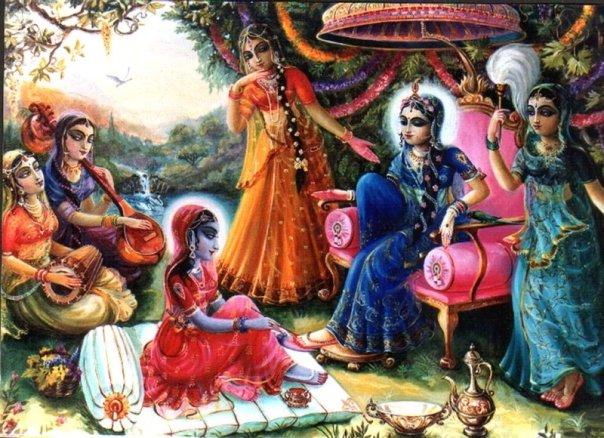 Jatila told her daughter Kutila that she is unable to protect her daughter-in-law Srimati Radhika from Sri Krsna.

Therefore, she decided to confine Her inside the house so that She would not be bitten by the eager glances of Sri Krsna.

Danistha came to Yavat to request that Srimati Radharani cook, because Krsna did not eat anything prepared by anyone else.

Srimati Radhika would generally go to Nandagaon everyday to cook, but because Jatila now made Her stay in the house, she could not go.

While Danistha was there, she whispered a secret into Lalita and Radhika’s ear and then left.

Visakha then came to Jatila crying and said a snake had bitten Srimati Radhika.

Jatila sent Kutila to get Abhimanyu and a snake-bite doctor to come and chant special mantras to free Srimati Radhika from the snake poison.

She herself then went to Paurnamasi and told her everything that had happened.

Paurnamasi said she would help, and she took Jatila to see Gargi, the daughter of Garga Muni.

She asked Gargi if she had learned the proper snake mantras from her father.

Gargi replied that she had not, but fortunately her younger sister named Vidyavali had, and fortunately Vidyavali was now visiting Vraja from Kasi where she lived with her husband.

Jatila begged Gargi to come to her home with Vidyavali to free Srimati Radhika from the deadly snake poison.

Meanwhile, Danistha and the other gopis who had pre-planned the events disguised Sri Krsna as Vidyavali.

When “Vidyavali” arrived at the home of Srimati Radhika she told Jatila that in order to cure Jatila’s daughter-in-law, she would need to chant mantras over Her body and also chew betel nut while chanting a special mantra on it, and then give it to Srimati Radhika to chew. Jatila agreed.

Vidyavali sent everyone out of Srimati Radhika’s room and pretended to have a conversation with the snake, and Sri Krsna Himself played the part of the snake.

In the conversation that ensued between Vidyavali and the snake, Sri Krsna in the voice of the snake explained to Jatila that the dreadful incident was the result of a curse on her.

If she would continue to keep Radharani from Her service at Nandagaon, no doctor would be able to reverse the power of the curse.

In this way her son, who would be bitten by the snake on the very next day, and her daughter-in-law would both surely die.

Hearing this from outside the door, Jatila quickly agreed to let Srimati Radharani go to Nandagaon everyday with no obstruction.

In this way Sri Krsna and Srimati Radharani were able to meet, and the Divine Couple were both cured of the snake bite of separation.