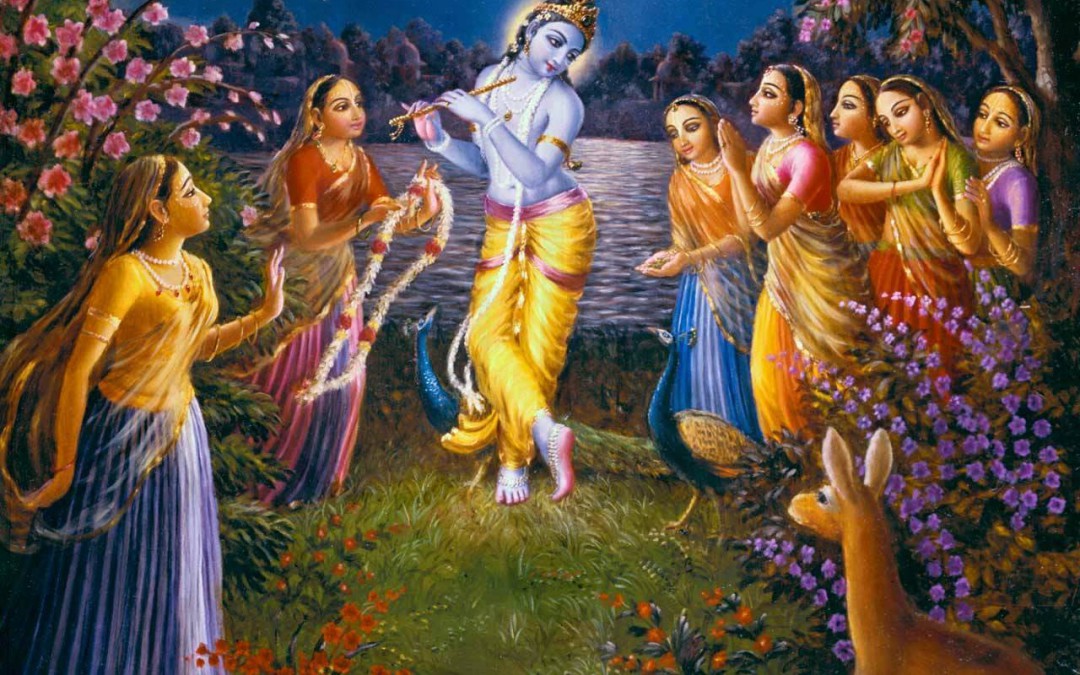 Once, a newly married gopi came to live in Nandagaon.

This gopi had heard of Krishnas name and His supremely attractive and wonderful activities, yet she had never had the good fortune to see Him directly.

Every day, Krishna played on His flute as He entered the forest to tend the cows with His friends.

Hearing the sound of His flute-playing, all the residents of Vraja would gather on the royal path, being very eager to see the unparalleled sweetness of His beauty.

Some stood on the balconies and some climbed trees. Some stood near the path and some peeped through windows.

That newly-married gopi also longed to go there and see Krishna, but her mother-in-law forbade her, saying, That black snake out there will bite you, so it is not proper for you to go.

The newly-wedded bride argued, Your daughter has gone there, so why are you not allowing me to go?

But the mother-in-law still did not give her permission.

Despite this restriction, the gopi went to a bush near the royal path and stood behind it.

In this way, she could see Krishna.

Understanding her mind, Krishna slightly twisted the tail of a calf who started running and jumping over to that new gopi and stood near her.

Krishna ran after the calf and arrived at the same spot.

Standing there for a moment in His beautiful tribhaìga-lalita form, He touched the chin of that gopi with His flute, and then ran off to rejoin His friends.

The new gopi, now absorbed in the sweetness of Krishnas beautiful form, lost her external consciousness and remained standing there, motionless, as Krishna entered the forest.

A considerable amount of time passed by.

Her mother-in-law came searching for her when she did not return home.

Shaking the gopis body, her mother-in-law cried, What I feared has happened!

You have been bitten by that black snake.

She brought the gopi back to the house and ordered her to make buttermilk from yogurt kept in a clay pot.

The bride still had not regained her external consciousness, so she took a pot full of mustard seeds instead and began to churn them, mistaking it for the pot of yogurt.

When the mother-in-law noticed this, she stopped her from churning and instead ordered her to bring water from the well.

Placing three pots on her head, one on top of the other and giving her a rope to hold in one hand and a little baby to hold in the other, she sent her for water.

The bride went to the well and prepared the rope to haul water, but because she was not in her natural state of mind, she began to tie the rope around the neck of the baby.

The other gopis, who had come there to fetch water, stopped her, crying out, Alas, alas!

What has happened to her?

It seems that she is possessed by a ghost!

Some gopis who knew the reality of the situation said, No, she is not possessed by a ghost, but by the son of Nanda Maharaja.

This is an example of man-manä bhava, which is full absorption in Krishna!

The Gopis would so often be fully absorbed in their Kanha and would even forget themselves!