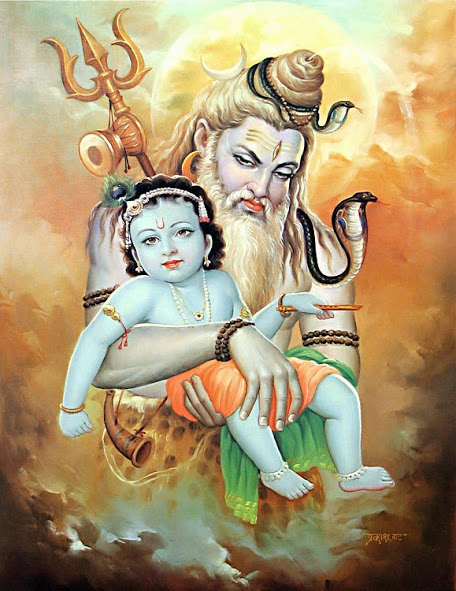 While Lord Siva was in meditation, he discovered that the Lord of all Lords has now appeared in Vraja, at the house of Nanda Maharaja.

So on the twelfth day after birth of Lord Krishna, Shiva decided to go to Gokul to see Krishna.

Parvati said she would like to go too, but Siva said it was too far for you to travel.

So Parvati said politely: I have heard that the butter from Gokul is very nice, can you bring some back. Shiva agreed and left for Gokul.

So Lord Siva arrived in Gokul.

The Lord was acting as a baby, performing His pastimes in the lap of Mother Yasoda.

Knowing that Nanda Maharaja generously gives charity to please the Brahmanas, Lord Siva decided to diguise himself as a Brahmana and proceeded to Gokul to see Lord Krsna.

But as soon as he touched the dust of Vraja, before entering Gokul, he realized that he should not change his form.

He thought, “The Lord knows who I am, therefore I must go in my real form.” This is the nature of the dust of Vraja- it brings perfect realization to the heart of a real devotee.

He wears a tiger skin, a garland of snakes, a belt of scorpions, and has ashes smeared all over his body.

Exhibiting this fearsome form, he entered Gokul, proceeded to Mother Yasoda’s house, and knocked on the door, he said
“ Bhikhsham De Hi”

Mother Yasoda answered the door, but, in her deep, ecstatic love for Krishna, did not recognize the visitor as Lord Siva.

Yasoda, always being generous to visiting saints, said, “Wait outside. I will bring you a gift.”

Lord Siva replied, “No, no, I do not want any gifts. I have come here to see your son.”

Upon hearing the visitor’s request, Mother Yasoda replied, “No, it is not possible for you to see Him. Anything else you wish, you may have. I see you are hungry and in need of clothing.

Please wait a moment, and I shall bring you some nice prasada and clean clothes. Please take them and leave.”

Lord Siva replied, “No, no, I have everything. My wife is Annapurna (another name for Parvati), whom I have left behind to come and see your son. Please allow me to see your son, if only for a second.”

Hearing Lord Siva’s plea, Mother Yasoda then said, “Take what I give you and go before your snakes and scorpions fall here. Please understand that my baby is very small and will be frightened by your dress, so please go.”

Knowing how stubborn Yasoda was, Lord Siva said, “I shall not go until I see your son.”

Mother Yasoda then said, “You can sit here as long as you want, but you will not see my son.”

Lord Siva replied, “I can sit here for ten thousand years. One day, when your son grows up and is no longer under your control, I will see Him then.”

Mother Yasoda then said, “O Babaji (respected saint), if you sit here for ten thousand years, I shall close this gate for twenty thousand years. I will open a different gate through which my son will go out to play. Do not challenge me. My lovely son is my life.”

Meanwhile, Krsna, laying on the bed, was aware of what was going on outside the door.

Both have unalloyed love for Krsna, but the mood of parental love is a closer relationship than the mood of servitorship.

Therefore, Lord Siva had to yield to Mother Yasoda in this confrontation.

Upon being defeated by Yasoda, Lord Siva thought, “O Krsna! You are the Lord of the universe hiding in the house of this cowherd lady. This is Your will, and if your will is not to see me, what can I do?”

Thinking in this way, Lord Siva stated to Mother Yasoda, “O lady, you yourself will soon call me to see your son.”

Hearing this, Mother Yasoda replied, “You go. I will not call you. You can take whatever else you wish, but do not ask me again to see my child.”

Lord Siva then left Yasoda’s house, feeling very morose. He reached the bank of the Yamuna river, sat down, and began meditating on how dramatically Krsna acts.

Krsna, knowing that Lord Siva, his best devotee, left the house unsatisfied, began to cry, and no one could stop Him.

All the Gopas and Gopis tried to stop Krsna from crying, but their attempts were of no avail. He continued crying loudly.

Then, a clever Gopi named Lalita approached Mother Yasoda and asked her if anyone had left the house displeased.

Mother Yasoda thought for a moment and said, “Yes, one mendicant came with snakes wrapped around his neck and wanted to see my child. I wanted to give him whatever he desired, but he insisted that he only wished to see my child. he did not take anything and left unsatisfied.”

Lalita then said, “A Sadhu should never leave one’s house unsatisfied. Whatever he wanted, he should have been given. This is the curse that is haunting your baby and all of us. Therefore, we must call the Sadhu.”

Mother Yasoda then described the appearance of the Sadhu to Lalita. Lalita then left in search of the Sadhu, found him, and brought him back to the house.

Lord Siva, having taken Krsna atop his lap, was lost in an ocean of transcendental ecstasy.

He said, “O Lord of the universe, O Lord of all, O Supreme controller, it is very difficult to ascertain how You will act next. It is inconceivable that the Lord who cannot be seen by meditating for thousands of years, is now acting as the child of a cowherd lady! Only You know your desire. No one else does. O Lord, I simply pay my homage unto You.”

After saying this, Lord Siva took the Lord’s little feet, touched them to his head, and chanted the Gopala Sahasra Nama Stotra, “the one thousand names of the Lord.” He later repeated these same names to Parvati when he returned home.

Upon seeing this, Mother Yasoda said, “Baba (father), watch your snakes. My child is very small.”

Hearing this, Lord Siva realized the superiority of the devotion of Mother Yasoda and understood why Krsna appeared as her son. If one becomes a real devotee of Krsna, Krsna will undoubtedly manifest to him.

Shivji then remember that he had to take some butter for Parvati. So he takes some butter and leaves for Kailash.

On the way to Kailash, Shiva was thinking about Krishna, and lost in that thought he did not realize that he was eating the butter. And when he reached Kailash, all the butter was finished.

When Shiva reached Kailash, he told Parvati all about Krishna and how beautiful he is.

Parvati said that fine but what about the butter I asked for.

Shiva, not realizing that the butter had finished, gave Parvati the container which had butter.

Parvarti said the container is empty. Shiva replied that the container was full but I had not realized that I had eaten all the butter.

Parvati said, since you did not bring any prasadam for me, no-one will eat your prasadam.

1. Please remember and buy what your wife has told you when she send you to shop!!! He he he!

2. Have strong desire to see Krishna as Lord Siva have

3.Serve sadhus and be careful not to offend them