Vrindavan story: Krishna steeling butter standing on the back of calf!!! 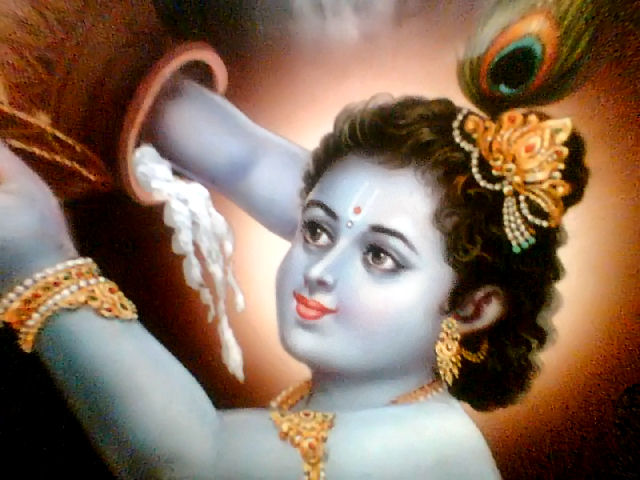 One day Yashoda told Krishna, “It’s Your birthday today. Go and bring a female calf here and worship her.”

He went out and chose a very beautiful she-calf. She was as white as a swan.

The calf was very healthy, stout and strong, and was jumping here and there.

Krishna wanted to catch her, but couldn’t because she was jumping so much.

After a great struggle He managed to catch hold of her,intending to bring her into the courtyard. He tried to tie up her
four legs, but the calf refused to let Him, and they had another wrestling match.

Somehow or other, Krishna managed to bring her into the courtyard.

As He was doing so, He noticed a pot hanging from a rope.

He immediately understood that this pot was full of sweet butter.

In an instant, His intense greed for the butter made Him forget that He was supposed to bring the calf in.

But how could He reach the butter? It was hanging high up in the rafters, and there was no ladder or anything to stand on.

When He was with His friends, He would climb on theirbacks, one by one, higher and higher, until He could reach the
butter. However, none of His friends were with Him, and He had no stick. What to do?

After considering carefully, Krishna thought, “I can reach the
butter very easily if I stand on this calf.”

He climbed up on the calf’s back, and when He stood upright He was just high enough to put His hand into the pot.

At that moment, the calf suddenly jumped away.

Krishna had put His whole arm into the pot, so when the calf ran away, He was left dangling there.

Mother Yashoda was churning butter, and when she heard Krishna weeping and crying for her, she smiled and ran out to
help Him.

As soon as she saw Him hanging high above the ground, she understood what had happened.

“You stay like that!” she told Him. “I’m not going to touch You.

And I’ll punish You for being naughty. I’ll never help You!”

Of course, Yashoda brought Him down.

Krishna was charmingly mischievous in His boyhood, and that is why He garnered so much love and affection from all the gopis, especially His mother.

Dont steel butter hanging on the back of calf!!!