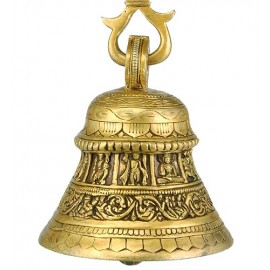 When  Krsna become old enough he started leaving his home in adventure of stealing butter from gopis houses.

One time, the gopis had an istaghosti ( meeting ) to discuss how to catch this Krsna in the act of stealing their butter.

Gopis decided to place bells over the pots and when He would try to steal the butter bells would ring and they would hear Him, and so catch Him.

So, Krsna went on with business  of stealing butter from gopis houses as usual.

But then He noticed that all the doors to the houses of the gopis were open.

Usually they were locked. Krsna could smell something was going on.

He entered a house very carefully, and climbing on the shoulders of a friend, He saw the bell hanging over the pot and knew it was a trap.

Krsna told the bell not to ring.

So the Lord took the butter and started to distribute the butter to His friends.

When He was about to eat the butter, the bell sounded.

“What about our deal?” said Krsna.

The bell said, “Offerings to You cannot be made without the ringing of a bell.”