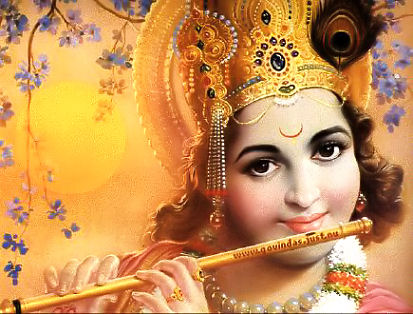 One day Krsna saw one of His companions playing a flute, thus He also desired to have a flute.

Flute grow with all other bamboo sticks on bank of Yamuna.

As thew grow all bamboo sticks are very proud that they are growing so high in the sky.

But that one bamboo stick was very humble he was not going up, but bending down.

He was very humble and bend.

He was performing great austerities standing on one leg in water of Yamuna for long time.

Villagers are often coming on bank of Yamuna and they would cut all this high growing bamboo sticks.

Only one bamboo stick who was bend down nobody touch.

He was not useful to them.

But that humble bamboo stick was very patient. He was waiting for his day of perfection.

One day the Lord Sri Krishna himself came on bank of Yamuna.

He was looking for proper bamboo stick to make his own flute.

Then from all bamboo he chose the bamboo stick bending humbly down.

From that bamboo on the bank of the Yamuna River he constructed His divine flute.

Krsna’s belongings are not ordinary, hence His flute is supernatural.

After ascetics perform great austerities for many births they may become a stick, ankle bell, or dress of Lord Krsna’s.

Similarly the bamboo stick used to make the Lord’s flute must also have performed great austerities.

When Krsna played His flute, the sound mesmerized Lord Brahma, Lord Siva and all the movable and immovable entities in the three worlds.

The scriptures state Krsna’s flute is His main weapon. By this weapon he conquer devotees hearth.

From this story we can learn how important humility and patience is.

If we have them finally we will be use by Krishna’s hands as bamboo was.

This humility should be important part of our life.

One should chant the holy name of the Lord in a humble state of mind:

1 ) thinking oneself lower than the straw in the street;
2) one should be more tolerant than a tree;
3) devoid of all sense of false prestige;
4 ) should be ready to offer all respect to others.

In such a state of mind one can chant the holy name of the Lord constantly.