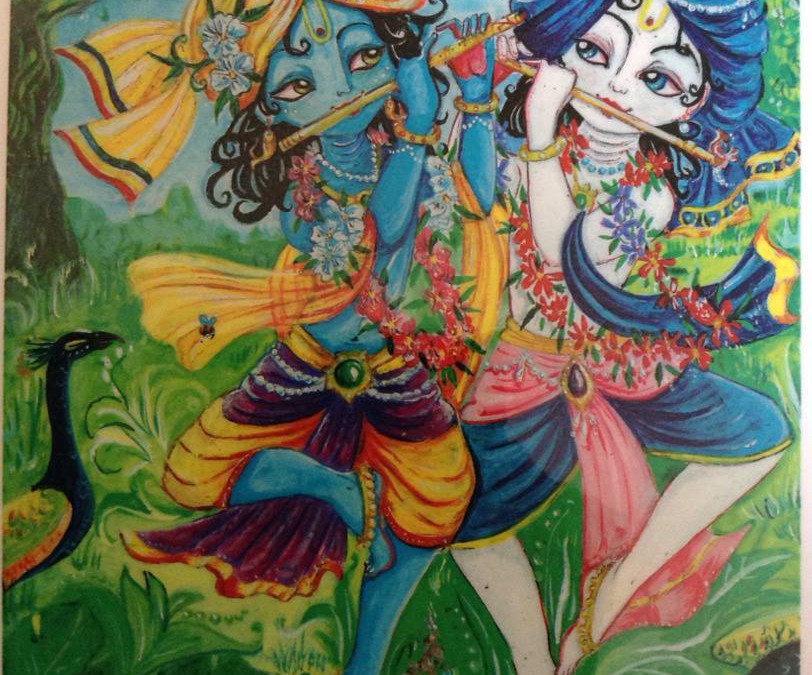 One day desiring to dress like Krishna, Lord Balarama asked Krishna if He could wear His peacock feather and play Krishna’s flute for just one day.

Krishna who dearly loved His elder brother, agreed and personally gave His peacock feather and flute to Balarama.

Meanwhile, in Mathura, the wicked King Kamsa was about to send the horse demon, Keshi, to Vrndavana in order to kill Krishna.

The Keshi demon asked King Kamsa, “How will I recognize Krishna?”

Kamsa told him that it would be easy to tell, because Krishna would be the only person wearing a peacock feather and playing a flute.

While Balaramaji was fully enjoying His pastime of being Krishna for the day, the fierce horse demon, Keshi, stormed into Vrndavana.

Seeing Balarama wearing a peacock feather in his crown and playing a flute, matching the description King Kamsa had given of Krishna, the Keshi demon roared up and gave Balarama a mighty kick that could have killed a full grown elephant.

This kick totally knocked the wind out of Balarama, and sent Him tumbling out of the demon’s sight.

Thinking that he had killed Krishna, the Keshi demon galloped away.

Balaramaji, picking Himself up, began to cry.

Balarama’s chest still hurt from the demon’s kick and He was short of breath.

Balarama was hungry, very tired and sore all over from tumbling so far.

Balarama told Krishna that he never again wanted to wear them, and that a huge horse demon had just violently kicked Him; thinking He was Krishna.

Then Balaramaji met His mother Rohini and fell asleep in her arms.

Krishna replaced the peacock feather in His crown, tucked the flute back in His belt and walked into the village.

Then Shri Krishna met the horrible horse demon and effortlessly killed him.

Nobody, never can take position of Krishna, God. When someone try then many
problems can happen.

Lord Balaram who is closest in creation in powers and qualities to Krishna could not be Krishna even for a day.

What to speak of us living entities who try to imitate God on daily basis trying to be enjoyers and controllers.

By trying this we will for sure meet our own destruction.

The sages, knowing Me as:

1) The ultimate purpose of all sacrifices and austerities;
2) The Supreme Lord of all planets and demigods;
3) The benefactor and well-wisher of all living entities;

…attain peace from the pangs of material miseries.