Tukaram turned vessel in to a golden vessel 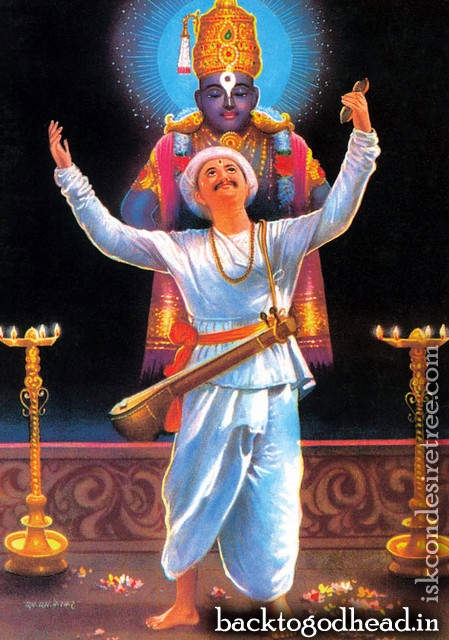 People from that village would very often invite Tukaram to perform his sankirtans and he would go there and sing his abhangs.

Often his bhajans used to go on till dawn.

One day when Tukaram was in Chinchwadi a Brahman who gives discourses on Ramayan came to that village seeing if he could have his discourse there.

He was doing this to collect money for his daughter’s marriage.

When the Brahman entered the village he saw that everyone went to have their bath only by around 8am, he thought that this may not be a good place as they were all very lazy and went to have a bath only by 8am.

When he enquired with the villagers they told him that Tukaram was here and that he would perform kirtans till about 4 or 5 in the morning and they would then return home and sleep for some time and then go for their usual work.

They also told him that his bhajans have been happening for about a month.

Hearing this, the old man knew that no one would be interested in his discourse and left the village.

One of the villagers then came and informed about this to Tukaram.

Hearing this Tuka went to the Brahman and prostrated to him and said that he should stay in this village and say Ramayan and that he would also sit with the villagers and listen to him.

The Brahman was happy and came with Tukaram.

The Brahman agreed to give a detailed discourse of Ramayan for forty five days.

This was because the miser knew that the villagers would come to him asking contributions for the discourse when it gets completed.

Knowing this he left the village a few days before it got over to avoid them.

On the last day the organizers started collecting money and went to the miser’s house for collection.

When they went there his wife said that he had gone to a nearby village on some work.

They then asked her for some contribution and she said that he had locked every thing and gone.

As the organizers wouldn’t leave without collecting some thing from them, she gave them an old leaking vessel that was used to wash their legs.

That evening there was a big function and all the donations were being given to the Brahman through Tukaram.

After giving the entire gifts the organizers who wanted to make fun of the miser, said that the miser had given a golden vessel and handed it over to Tukaram.

The miser’s wife who was listening to this felt bad and was thinking that she would definitely have given a golden vessel to the Brahman if her husband had permited her.

When Tukaram received it the vessel really turned in to a golden vessel.

Tuka knew what was in her heart and made this change.

The lady was very happy on seeing this.

The Brahman happily collected all the gifts from the villagers and went back to complete his daughters marriage. Tukaram also returned to Dehu.