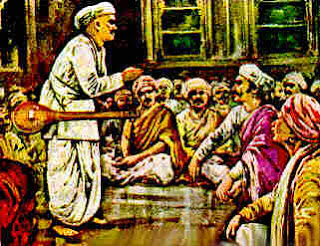 Sant Ramdass had also herd about him and had asked Shivaji to meet Tukaram if he happens to visit Dehu.

As his guru had asked him to meet Tukaram, Shivaji then decided to met Tukaram.

Once he met him he understood the greatness of Tukaram and frequently started visiting Tukaram.

Shivaji considered Ramadass and Tukaram as his two eyes and would do every move only after consulting and taking blessing from them.

One day Shivaji wanted to give some gifts to Tukaram.

He took some gold coins in a plate and went to meet Tukaram.

Shivaji kept the plate in front of Tukaram and prostrated to him.

Immediately Tukaram started shivering, he then got up and ran away.

Shivaji could not understand this reaction of Tukaram and he asked the other sishyas sitting there why Tukaram Maharaj did this.

They then told him that all these days he has been coming alone and meeting him but now he had brought some gold for him which he dint like and that is why he ran away.

Shivaji then said that he had brought it as there were so many sadhus who eat in Tukaram’s house everyday and was worried how he would be able to feed them without money.

The sishyas then asked him to go and console Tukaram and bring him back.

Shivaji then went to him and apologized for what he did, but again told him that he knew that Tuka was a sadhu and doesn’t go after money but then he said that he was a family man and there were so many sadhus eating with him every day after the bhajans & kirtans and thought this money would be of help to feed the sadhus.

Shivaji then requested Tukaram to accept his offerings for his happiness.

Tuka replied to him that he would not eat cow’s meat to please someone and said that gold was equivalent to cow’s meat for him.