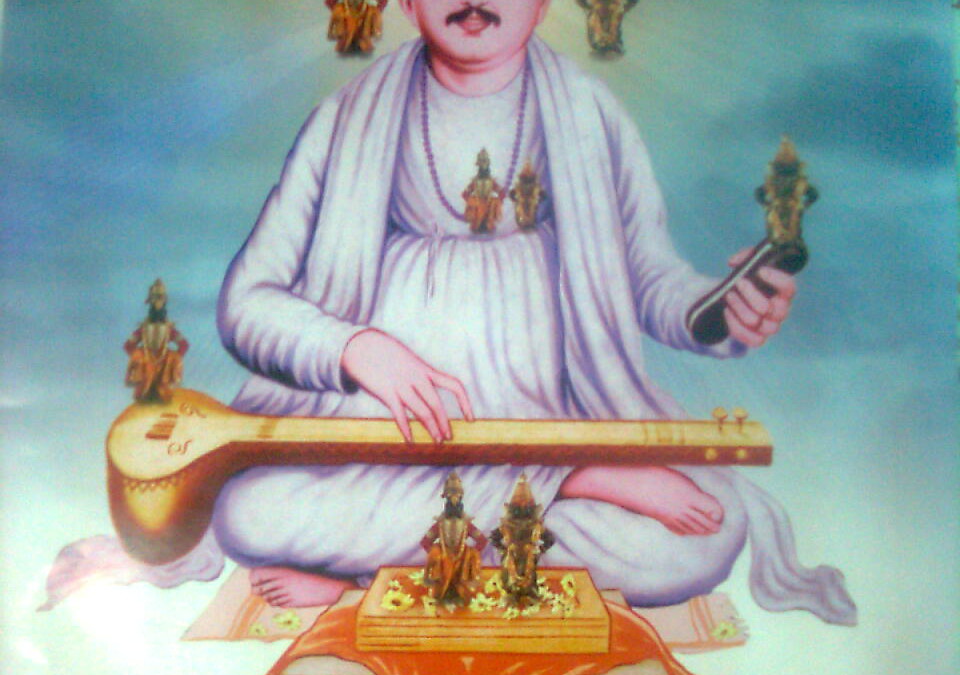 One day as usual Tukarams shop was looted by miscreants as he had left it open and left with a group of pilgrims to Pandharpur.

His wife then gave him some jewels and asked him to mortgage the same to get stocks for his provision stores.

He mortgaged the jewels collected the money and was returning home.

On the way he saw some group of beggars singing about Vitthal and distributed the money to them and returned home.

He would never bother about running his business and family and did not understand this materialistic world.

He would forever be chanting, singing and dancing with tears in his eyes and Vitthobha in his heart.

His wife knew about his character and knew he would not be able to bring money to run the family.

The next day his wife Jijabai left home in the morning as she had agreed to do some household job in her locality.

Tuka seeing her going out in morning asked her where she was going.

She then told him that there was no money left at home and that she had to feed the children and had agreed to do some household work to feed them.

Hearing this Tuka felt bad and asked her to stay at home and said that he would now go for some work and get her money to run the family.

He then set out to ask for a job.

Whenever he would enter any house the head of the house would prostrate to him, welcome him, ask him to be seated and ask him how they could be of service to him.

This was because everyone knew that Tukaram was a great saint and had very high regards for him.

When he asked them for a job they would ask him to take whatever he wants for free and not embarrass them by working for them as they considered him as Pandurang himself.

This was not agreeable with Tuka and would not take anything from anyone for free.

Tuka now understood that it would be difficult for him to get a job in Dehu and decided to go to some other neighboring village in search of a job.

He came across an old man who had a big field and asked him for a job.

The man on seeing Tuka liked him and asked him what work he would be able to do.

Tuka said that he would do any work that he wanted him to do.

The old man then asked him to take care of his field for the next two months from birds and other animals from destroying the crops.

There was an elevated area in the middle of the field for him to be seated and asked Tuka to sit there and take care of the field.

Tuka then said that he had to go home and give some money or grains to his family for them to take care of themselves.

The old man then gave him some grains and asked him to give it to his family and return for work.

Tuka promptly delivered the same in his house and came back to the field and sat there.

He did not realize that he had to scare them away and protect the corn field. He would forever be lost in singing abhangs.

The old man was happy that he had kept an honest person to take care of his farm and was busy with other work.

After two months the old man came to see the farm but was very angry when he found that all his crops have been destroyed.

He saw that Tuka was still standing on the elevated floor and dancing and singing the praise of Vitthal not knowing what was happening in the field.

The old man asked him why he did this when he was asked to take care of the farm and said that this act of him has resulted in a very big loss for him.

Tuka then told him that he dint know what happened and apologized to the old man.

The old man told him that he had lost about Rs.2000 because of his carelessness and asked him to repay the same.

Tuka then told him that he dint have that kind of money and would not have come for a job if he had the same.

The old man then said that if he doesn’t pay this money he would take him to the king for justice.

Tuka then begged him not to take him to the king but punish him directly and would agree to whatever punishment the old man gives.

This was because the king was Shivaji who was his disciple and Tuka dint want to go there as Shivaji would pay the old man on his behalf.

The old man then told him that it is of no use for him to punish him and that he only wants his money back.

Tuka dint know what to do and said “Panduranga” with tears filled in his eyes.

Hearing this, the old man got wild and asked him why he was saying Panduranga as if he was Tukaram Maharaj. Tuka then told him that he was only Tukaram.

Hearing this the old man prostrated to him and apologized to him for scolding him and told him that his farm was now blessed with the dust from his feet and that was enough for him to get a better yield next time.

Tuka on hearing this started crying and chanted the name of Vitthal.

Jijabai heard about this and was happy that her husband had finally earned something and is returning home.

She then asked him to go to the market directly, sell the same and also gave him a list of provisions to be bought.

On the way when he saw the temple he got down to have a darshan of Vitthal. There were some children playing there and every kid in Dehu knew him.

When they saw him with a load of sugarcane they went to him and asked him if they could take one. Seeing the kids asking for the sugarcane he distributed all the sugarcane to the kids and started singing and dancing with them.

All the children were now chanting “Panduranga Hari, Vasudeva Hari, Rama Krishna Hari” Tuka then went in to the temple had a darshan of Vitthal and then came back to realize that he dint have anything with him now and that Jija would be angry with him now.

He then went home empty handed. Jija on seeing him back home asked him if he had sold the sugarcane and got the money. He then told her that he had distributed it to the children near the temple.

Jija was very angry and asked him why he dint think about his children and started scolding him. He then said that there was one last sugarcane left in the cart and gave it to her.

On hearing this Jija became very angry and took the sugarcane and beat him on his back.

The sugarcane broke in to two. Tuka then smiled and told Jija that Vitthal had broken the sugarcane in to two equal halves using her hands and his back so that both get an equal share.

Hearing this Jija dint know how to react and stood still for a moment.

Jija then thought the whole of Dehu considers him to be a saint, Shivaji Maharaj comes for advice, Pandurang speaks to him directly, but in spite of she being his wife why did I not understand him and think only about worldly affairs. She then apologized to him and prostrated to him.