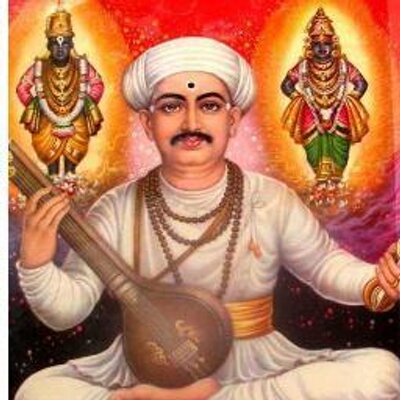 Lohagaon (लोहगाव), a small village, is 13 km away from Pune.

A sizable number of residents of Lohagaon were his disciples.

On one such occasion, while Tukoba was delivering a religious discourse, a miracle took place.

There was a resident of Lohagaon, who used to regularly attend the discourse without fail.

On that particular day, his son was critically ill, even then he came to attend the discourse with complete faith in God.

While he was leaving his home, his wife repeatedly requested him not to leave the critically ill child and go for the discourse.

But he left saying that the God was the real caretaker of all the beings.

Just a short time thereafter, his son died and his wife became inconsolable.

She was enraged with the thought that in spite of knowing the ill-health of their child, her husband had left for discourse.

She could not control her anger, lifted the dead body of her son and arrived at the venue of the discourse directly.

She laid her dead son’s body in front of Tukoba and said, “While our son was on deathbed, his father said that we should have complete faith in God and that we should do nothing and left for discourse. Now you tell me, where is your Narayana?”

On listening to her fierce words, the audience were stunned, nobody spoke a word. Tukoba realized the gravity of the situation, he felt extremely sorry for the plight of the mother.

He started to invoke Panduranga with deep anguish in his mind.

He said, “O Panduranga, we have read Your supremacy in Puranas, we are merely Your servants. Only You can perform the pastime of bringing lifeless creatures to life! It is Your motto to avert the calamity of Your devotee. Hey Panduranga, kindly take pity on us and show Your prowess to us by bringing this dead boy to life.”

At that moment, he uttered a couplet as follows:
“अशक्य ते तुम्हा नाही नारायणा” meaning: There is nothing impossible for You, O, Narayana.

After his fervent prayer, he asked all the assembled devotees to chant the name of Panduranga loudly in unison.

All the devotees, with their eyes closed, got immersed in chanting the name of Panduranga.

When they opened their eyes, they found that the boy had already got up and was chanting the name of ShriHari along with them!

Thus, the sainthood of Tukoba became evident to everyone. The entire towns and villages were abuzz with the news of this miracle. Tukoba was being hailed as a supreme saint.