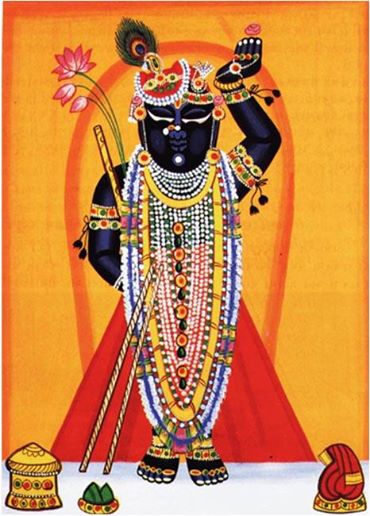 Five years ago there was a terrible monsoon. Water poured from the sky as if the end of the world had come. Soon the small lanes where turned into torrents of waters, which created a lot of trouble for both men and animals.

Especially affected were the free-roaming cows who soon began to wander throughout the village, desperately in search for shelter to take from the devastating rainfall.

One sadhu whom the villagers called Baba, felt the obvious distress of the cows very deeply and decided to put his own bhajan (spiritual practice) aside in order to help the cows.

Baba thought: Five thousand years ago Krishna had helped the cows in an even more difficult situation by lifting the mountain Giriraja and held it up like a huge umbrella…Something quick needed to be done because the cows were in a similar situation as they had been at that time.

Baba worked day and night for two days getting help from whoever had a free hand to give and at the end he had constructed a simple rain-shelter large enough to accommodate the cows of Aniyor and thus he gathered them under the roof of his makeshift “goshala” (cow-ashram).

Exhausted he went to sleep together with the cows. But soon he woke up and could not fall asleep again– because of hunger. He had worked so hard that for 48 hours he had found no time whatsoever to eat.

At around midnight he saw a little boy entering the cowshed. He had a bowl of laddhus with him and sweetly offered them to Baba:

“Here, eat these laddhus – you must be hungry. In the morning I will collect my bowl. And by the way, you may need this tooi”

With these words he handed Baba a stick for cow-herding and quickly left. Everything happened in the dark and ever so quickly.

The next morning, there was a big commotion in the village. The priests of the temple on top of the Giriraj mountain had ordered a search of the whole village.

That night a thief had entered the temple and had stolen Nathaji’s
(the name of the local Krishna deity) silver bowl and His cowherd stick.

When Baba heard about this he immediately went to the cowshed and inspected.the bowl and stick in the bright daylight. There was little doubt – they matched exactly the descriptions the priests had given.

Could it be that the Lord had personally appeared before Baba, fed him laddhus and provided him with a cowherd stick just to acknowledge the seva which he had done to protect the cows?

Baba decided to find out for sure but without taking the risk of becoming famous as someone favoured by the Lord. Thus, he went to the chief priest with the silver bowl and the golden stick in hand and told him that a boy had visited him at night and deposited these items, saying he would return to collect them sometime later.

When the priest inspected the bowl and the stick he immediately recognized them as the belongings of Sri Nathaji and thanked Baba for returning the lost items of the Lord.

Baba must have smiled in ecstasy thinking: “If you only knew that the thief was the One you worship upon your altar!”

When one lives in Vrindavan, one is constantly reminded of Krishna. He is worshiped in the many temples there, devotees glorify Him in song and narrations (katha), sadhus and saints describe Him with affection, etc.

But does He ever appear in person and make Himself visible to the eyes of those who so ardently worship Him?

Is He only adored but remains invisible – or does He actually engage in a tangible relationship with His worshippers?

These questions have held my interest for such a long time because I wish to worship a God with whom I can have an “experience” – having become tired of the innumerable religious concepts and mental concoctions.

Vrindavan abounds with such stories. Stories in which Krishna touches the human dimension just like when He came down from the altar to play marbles with the village boys, etc.

Anywhere else one might be inclined to discuss such stories as imaginative but here in Vrindavan where Krishna seems to be standing just around the corner, the supernatural becomes totally natural – a part of life.The reason is given in the sacred scriptures:

O Lord who rises in the hearts of Your devotees. You became deeply concerned when You saw Your devotees and the cows troubled by the terrible rainclouds sent by Indra. Thus you lifted the great Govardhana Hill with Your left lotus hand.O Lord who protected Vraja, O lotus eyed Lord, please please protect me in the same way.”
(Sri Mukunda-muktavali 4)

( Source: Later Baba revealed the entire story to a relative of Krishna Murari Goswami of Vrindavana who in turn narated to Sacinandana Swami )