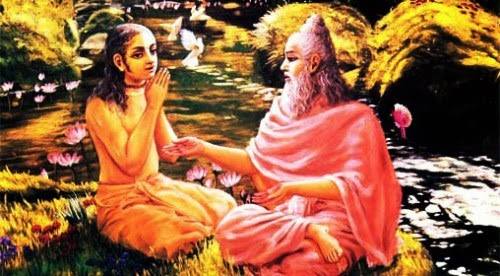 There was one thief, one robber. He was robbing businessmen and murdering people, and then one day he heard that the king of the country had invited all the sannyasis, sadhus and ascetics for a big meeting.

The thief was thinking, “Maybe the king will be giving help to them, so I will see if I can rob someone and get some money.”

So he went to the meeting and hid himself away.

The king then came out onto his balcony, and he began to speak. “O great sadhus, I have a daughter and she is very inclined to marry a saintly person. So I am offering half of my kingdom with this girl, so someone please marry my daughter.”

As soon as he said this, fifteen people in the front row got up and left. They were sannyasis, they were not interested. They came because they thought, “The king has called for a saintly meeting, so maybe there will be an opportunity to preach.” But when they heard the king ‘s proposal, they left.

And then the other row came forward next.

The king said, “Look, I will give 75% of my kingdom. I will only keep a little part for myself. Please accept my daughter.”

The first person said, “My dear sir, the thing is that we are saintly persons. And we are not sannyasis, we are married persons. I have my wife and I have my ashram. I do not want to marry your daughter. Since you are the king, in order to respect you I have attended your meeting. So please give me permission and I am going.” And he left.

Hoping to make best use of this opportunity, the thief disguised himself like a saint and went and sat with the others.

He was sitting in a very uncomfortable position with his eyes half-closed.

All the 5 sadhus present there refused the king’s riches saying that their purpose of life is fulfilled only by constantly engaging their minds on the lotus feet pf Supreme Lord and they neither need the kingdom nor the princess for the same.

Then the king came to the sixth person, who was the robber, and said to him, “O great saintly person…”

“You are wrong, ” the thief interrupted. The king was surprised. “What?

To address you as a saintly person is wrong?”

“Yes, because I am a robber, not a saintly person. But I ask you, who wants your country? Who wants your kingdom? If it has got any value, why is it that these people got up and left? So I would rather pursue on this sadhu path. I will neither rob any more, nor will I marry your daughter. I am sorry but I am going.”

In the above story, we can see that robber he had accrued the nature of a thief by his previous activities, but by association he developed the nature of a sadhu, in just a very short time. “lava matra sadhu sanga sarva siddhi haya.”

The hearts of saintly people are non-different from holy-dhams as both are special abodes where the Supreme Lord loves to stay.

Saintly people are equi-poised, friendly to all living entities, merciful, tolerant. They are aware of the truth that all the riches in this world are temporary and they don’t hanker for wealth.

They lead a simple, straight forward life, engaging their body, mind and soul completely in service of Supreme Lord.

Akrura, the paternal uncle of Lord Krishna was one such saintly person. When Krishna went to his house, Akrura humbly received him and prayed to the Lord, thanking him for visiting his house.

The Lord glorified his saintly uncle, through the following verse in Srimad Bhagavatam (10.48.31)

“No one can deny that there are holy places with sacred rivers, or that the demigods appear in deity forms made of earth and stone. But these purify the soul only after a long time, whereas saintly persons purify just by being seen.”

We all know how Narada Muni was able to change the barbaric Mrgari to sincere devotee just by associating with him for few moments.The following story very nicely illustrates how sadhu’s association purifies the heart immediately.