Story: Offering of sweet rice to Krishna through meditation! 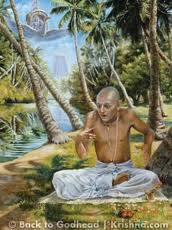 Once there lived a poor brahmana in the city of Pratishthanapura in South India.

He was a very sincere devotee of the Lord Krishna and was satisfied with whatever the Lord had given Him. He used to hear the glories of the Lord from realized souls.

At one such meeting, while he was very faithfully hearing about Vaishnava activities, he was informed that these activities can be performed even by meditation.

So daily he used to take bath in river Godavari and then started meditating on the Lord.

When he had fixed the form of the Lord in his mind, he began to imagine in his meditations that he was dressing the Lord very nicely in costly clothing, with ornaments, helmets and other paraphernalia.

Then he offered his respectful obeisances by bowing down before the Lord. After finishing the dressing, he began to imagine that he was cleaning the temple very nicely.

After cleansing the temple, he imagined that he had many water jugs made of gold and silver, and he took all those jugs to the river and filled them with the holy water.

Not only did he collect water from the Godavari, but he collected from the Ganges, Yamuna, Narmada and Kaveri.

He also imagined to physically collect all the required paraphernalia and offer them to the Lord mentally and performed arati.

He was doing this for years and one day he decided to offer sweet-rice for the Lord.

He was preparing it in his imagination but was not satisfied as it was very hot.

He wanted to make sure whether it has cool enough and so touched the pot and his finger was burnt.

In this way his meditation broke and he was surprised to find that his finger was actually burnt.

When he was thinking like this, in Vaikuntha, Lord Narayana began to smile humorously. He immediately sent an airplane that brought the brahmana to the Lord’s abode.

Although the Lord was present in Vaikuntha, He was present also in the heart of the brahmana when he was meditating on the worshiping process.

Thus, we can understand that things offered by the devotees even in meditation are accepted by the Lord, and they help one achieve the desired result.

The Lord is so merciful that even if one is not able to afford to get the prescribed paraphernalia, the Lord accepts the offerings that are made mentally.

Each and every form of devotional service in the form of shravanam,kirtnam,smaranam,vandanam,archanam,paada-sevanam,daasyam,saakhyam,aatma nivedanam is equally potent and would take us close to the Lord as long as we sincerely endeavor and engage ourselves whole heartedly in serving Him with love.

While giving the mantra “on namo bhagavathe vaasudevaaya” and instructing Dhruva Maharaj about how to worship the Supreme Lord, Narada Muni says in Srimad Bhagavatam Canto 4 chapter 8, verse 58

“One should follow in the footsteps of previous devotees regarding how to worship the Supreme Lord with the prescribed paraphernalia, or one should offer worship within the heart by reciting the mantra to the Personality of Godhead, who is nondifferent from the mantra.”

We can find from the above verse that how much simple is the process of devotional service.