Story of a saint: Previous life of Bilvamangala Thakur !!! 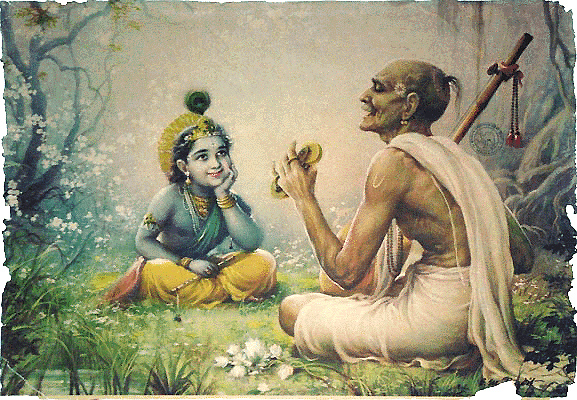 There is wonderfull story of great saint Bilvamangala Thakur.
But there is very unknown story of his life before.

In his previous life he was great sanyasi and great devotee of Lord Krishna. He was at level of bhava – having intense love for Krishna.

He was found of organizing Bhagavatam festivals after which he would distribute prasadam – food to people who would attend.

Once while organizing festival he has spend all his money. He needed more money to feed devotees. So he went searching for wealth.

By walking around he saw cremation of young lady princes who has died at age of 18. There was her unhappy father, mother and all citizens.

Father has lite the fire and everyone then left away. Princess was burn with many diamonds and golden ornaments on her body.

The Sanyasi ( Bilvamangala Thakur ) saw all this and thought:

What is use to death body of princes all this valuable jewelry. Better take all this and use it in service of Krishna and devotees.

So he approached death body and tried to take jeweled ornaments but then he heard the voice:

– Stop it! Dont take this! It was voice of death princess.

– If you need wealth then go to my father the king. Tell him that i have send you. Under my bed there is box with great treasure. Ask my father for that wealth and use that wealth to serve devotees and Krishna – spoke death princess.

Sanyasi ( Bilvamangala Tahkur ) happily went to king and revealed what has happen.

King happily donated that great wealth to the sanyasi. Bilvamangala went and spend all wealth on Bhagavatam festival. But at the end again there was shortage of some wealth.

So he went to cremation place of princess and took the diamond necklace.

As he was going he heard voice of death princess:

You have done great mistake by taking this necklace. I curse you that although you are so advance in your love for Krishna, to take birth one more time and live immoral life.

In his next life sanyasi was born as women hunter. Princess has also taken birth again as his prostitute Cintamani. In this life time she has shown him the way acting as his instructing Guru. She has told him:

– If you have such desire for Krishna as for me you would be immediately become self realize soul!