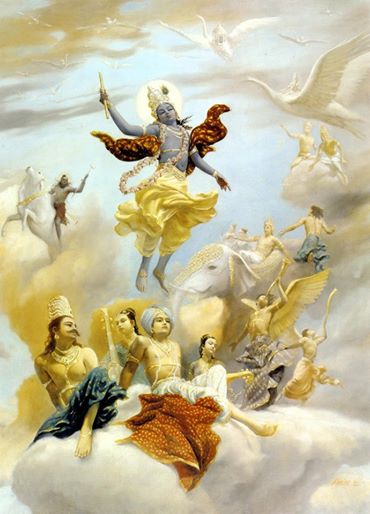 Once upon a time when the demons were defeated, the demigods became proud. “Now we are victorious!”

So when the demigods became puffed up, Krsna wanted to crush their pride.

Therefore He appeared before them in the wonderful form of a yaksa, a celestial being.

When the Supreme Lord appeared in the sky in this wonderful form, the demigods were unable to recognize Him.

Out of curiosity, Indra (the king of heaven) told Agni (the fire-god) and Vayu (the wind-god), “Go and test Him. Ask who He is and report it to me.”

Agnideva went there and asked, “Who are You?”

The Lord in His wonderful yaksa form replied, “Who are you?”

Agnideva, being very proud, said, “Don’t You know who I am? I am Agni, the fire-god!”

“Oh, you are the fire-god? Are you very great?”

“I can burn anything to ashes.”

The Lord took a blade of grass and placed it before Agni.

“All right, burn this tiny piece of grass.”

Agni applied all his power and energy but could not burn it.

“Where is your sakti [power]?” the Lord asked.

His pride crushed, Agni hung his head and left.

Then the wind-god went to see the yaksa and asked, “Who are You?”
The yaksa said, “Who are you?”

“I am the wind-god!” Vayu said proudly.

“Are you very great, wind-god?”

“I can blow away anything.”

The yaksa pointed to the tiny blade of grass. “All right, blow it away.”

Vayu applied all his force, uprooting huge trees, but the tiny blade of grass was not shaken at all.

Vayudeva’s pride was crushed. Hanging his head, he left.

At last, Indradeva came to investigate, but the wonderful yaksa had disappeared. There Indra saw Umadevi, the wife of Lord Siva.
“Who was He?” Indra asked.

Umadevi said, “Don’t you know? He is the Supreme Brahman, Parabrahman. You are devoid of brahma-jnana, knowledge of the Absolute Truth. So how can you recognize Brahman? You should get brahma-jnana.”

( This story was told from His Holiness Srila Gour Govinda Swami and comes from the Kena Upanisad, Part III. It is also told by Srila Bhaktivinoda Thakura in Jaiva Dharma, Chapter 14, “Discussion on Sakti.” )

So sometimes pride crops up even among devotees. It is so subtle.
The demigods are also devotees, because they carry out the orders of the Supreme Lord, but they are proud.

When the demigods think in this way, the Supreme Lord understands and crushes their pride. That is Krsna’s mercy.

In Srimad-Bhagavatam the gopis, Krsna’s cowherd girlfriends, say, nija-jana-smaya-dhvamsana-smita: “O Lord, You crush the pride of Your own men. That is Your mercy.”

Especially in Kali-yuga, the present age, it is said, “Pride is the measuring rod.”

Everyone thinks himself to be very great. “Yes. I am great!”

Then others say, “What? You are great? No. I am great!” Then they quarrel and fight.

Therefore this is Kali-yuga, the age of quarreling and fighting.

In such a horrible age, where pride is the measuring rod, Lord Caitanya Mahaprabhu’s teaching is required.

The pot of the heart should be made of these four constituents:

Trnad api sunicena we should think of ourselves as humbler than a blade of grass lying in the street;

taror iva sahisnuna we should be as tolerant as a tree;

amanina we should not demand respect for ourselves;

manadena rather, we should give respect to one and all.

Mahaprabhu is the giver, and you are the receiver. If your pot is not made of these constituents, how can you receive?

Our heart is the container in which we can receive the prema-rasa given by Mahaprabhu. We have not examined the pot.

Our pot has so many holes that although He gives, everything just pours out.

We must understand this. Krsna says that pride, arrogance, conceit, harshness, and ignorance are demoniac characteristics. Demons are generally proud, puffed-up persons.

But one who has come to the path of devotional service should not be proud at all. One should be very humble, much humbler than a blade of grass.

Although a Vaisnava is the most exalted person, he is prideless and gives all respect to everyone, knowing everyone to be the resting place of Krsna.

A Vaisnava is a very elevated person, but his mood is, “I am the lowest of the low. Everyone is superior to me. No one is below me.” That is trnad api sunicena no pride at all.

“Pride, arrogance, conceit, anger, harshness, and ignorance these qualities belong to those of demoniac nature, O son of Prtha.” Pride is a demoniac quality. A Vaisnava is prideless, and he gives respect to one and all be-cause he sees Krsna in the heart of everyone. He does not disrespect even a tiny ant, because he sees the relationship with Krsna: “This is Krsna’s jiva.”*

“If one chants the holy name of Krsna in this manner, one will certainly awaken one’s dormant love for Krsna’s lotus feet.” (Caitanya-caritamrta, Antya-lila 20.26)

( Explanation given by His Holiness Srila Gour Govinda Swami )