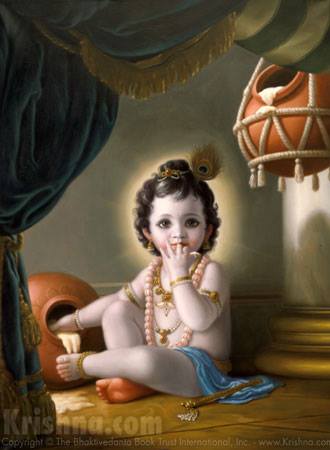 As Krishna grew older and bigger, He often wore only a golden chain around His waist, which tinkled and jangled as he walked.

He always wondered, “Where is that sound coming from?” He used to look here and there, not realising that He was making the sound Himself.

The gopis came to see Krishna in his house, but they came to Yashoda Ma to complain about her son: Sometimes Krishna comes to our houses, and He steals our butter, even though we have hidden it in different places.

He has so many friends — Sudama, Sridama, Subala, Madhumaìgala — and they’re always with Krishna. They’re just like mischievous little monkeys.

Krishna’s baby friends were all naked, and they were His constant companions.

When the gopis came to Mother Yasoda to complain about Krishna, they were not at all angry.

On the contrary, they felt sorry for Yasoda. They thought, Yashoda is not as fortunate as we are.

Krishna comes to our houses and plays here and there, and steals things according to His own sweet will; but He doesn’t steal things in His own house, and He does not play so sweetly there.

So Yashoda is not as fortunate as we are, because she doesn’t see all these sweet pastimes. We are so blessed.”

It seemed as if they were coming to complain to Yasoda. But really, they were only pretending to complain, so they could relish sharing stories about Krishna, and let Yashoda know how sweet her son was.

Here are some of the stories that Yashoda’s friends would tell her:

Oh! Your boy has become so naughty! He enters our houses, and plays so many mischievous tricks. He steals our butter, and then He hands it out to his friends, and even to the monkeys.

Sometimes He makes a crafty plan, and tells one of His friends, You go to your mother, while we hide in the shelter of a tree, or another good hiding place just outside the house.

Say to your mother, Oh, come quickly! Someone has untied the calf’s tether, and it’s running free. Now it’s taking its mother’s milk, and soon there won’t be any left.

When the boy tells his mother, the gopi goes chasing after the calf, and while she is away, Krishna and His friends enter her home, and steal butter and whatever else they want.

Sometimes a gopi would hide in her own house thinking, “Krishna must come, and then I will catch Him.” Sure enough, Krishna would creep in and put His hand in the pot of butter. The gopi would suddenly pounce on Krishna and scold Him:

“Oh! You are stealing in my house?”

Krishna would say, “Oh, Mother, I came here because I thought this was My home and you are My mother. It never occurred to Me that you’re not My mother, and I certainly didn’t think you’d catch hold of Me and beat Me.”

Saying this He smiled, and the gopi’s heart melted. Although she had caught hold of Krishna’s wrist, He wrenched His hand free and ran away.