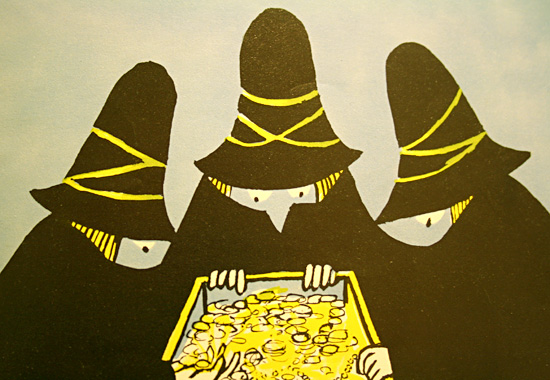 Once, long ago, there lived a group of three robbers in a big town.

All the three were experts in one field or another.

Once, they robbed a house and escaped with a huge booty. In the booty there were many precious stones, diamonds and jewels.

Due to heavy vigilance in the city, they were not able to encash the precious stones, diamonds and jewels.

So they took the booty to a dense shrub and buried it under a jasmine plant.

While returning from the shrub, they all felt hungry.

They decided that one of them would go to the town and get something to eat.

One of the robbers left for the town.

The other two robbers started having a heavy discussion.

They decided that, if they were ready with a heavy stick, when the third man returned from town, they could beat him up and kill him.

Then, it would be enough to divide the booty into two parts.

Meanwhile, the man in the town thought, “I am feeling very hungry. Let me eat first and take the remaining for the two.”

After eating, he thought, “Those two fellows are actually not my friends. They are just pretending to be friendly towards me. Why should I care about them?

If I mix some poison in the food, the two will eat the poisoned food and die. Then all the booty will be for my enjoyment.

So thinking, he added poison to the food and took it to the other. When the man returned from town, he was in for a surprise.

The two others took their heavy sticks and thrashed him. They beat him to death.

One of the thieves said, “Now that fellow has died. Both of us are hungry. So let’s have the food and then divide the booty.”

The other thief agreed and they ate the poisoned food. And alas, they also died.

The story tells us the fate of those who want to enjoy everything themselves. Such people are very self-centered.

During the churning of the Milk Ocean, Dhanvantri appeared with a container of nectar. The demons immediately snatched the container. Now there was a quarrel among the demons as to who would first taste the nectar. Each demon would insist that he should be the first.

Srila Prabhupad says in the purport: “This is the symptom of demons. The first concern of a nondevotee is how to enjoy his personal sense gratification at once, whereas the devotee’s first concern is to satisfy the Lord. This is the distinction between the nondevotee and the devotee. In this material world, since most people are nondevotees, they regularly compete, fight, disagree and war among themselves, for everyone wants to enjoy and satisfy his own senses. Therefore, unless such demons become Krishna conscious and are trained to satisfy the senses of the Lord, there can be no question of peace in human society or any society, even that of the demigods. The demigods and devotees, however, always surrender to the lotus feet of the Lord, and thus the Lord is always anxious to satisfy their ambitions. While the demons fight to satisfy their own senses, devotees engage in devotional service to satisfy the senses of the Lord. The members of the Krishna consciousness movement must be alert in regard to this point, and then their preaching of the Krishna consciousness movement will be successful.”

Recently doctors have found out that people who very often use the words, “me, mine, myself, I”, etc. are more prone to heart attacks. So, why should we cause harm to our own self, thinking we can be the sole enjoyer? The way out of this is to have one interest- to satisfy the senses of the Lord.

Just as in a family, the interest of all the family members is one, the entire human society should only have one interest. All living entities should have only one desire and that is to satisfy the Lord who is the Supreme enjoyer and thus there will be no clash of interest.