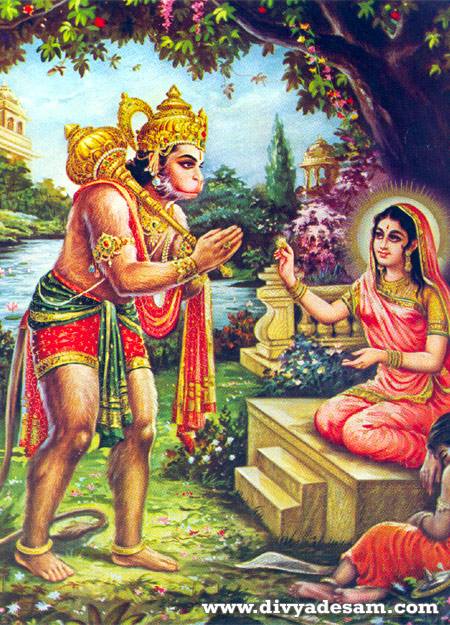 In the Ramayana, we find that after Ravana was killed, Sri Hanuman went to the Ashoka vana to meet Sitadevi and inform her of the good news of Sri Ramas victory.

Srimathi Sita was extremely delighted on hearing the news and asked Hanumanji to ask for any boon he desired.

Sri Hanuman was full of anger against the deamoness who were guarding Sita devi because they were always causing trouble and fear to her. So he wanted Sitadevis permission to kill them.

Mother Sita exhibited her unlimited compassion and magnanimity when She said that those Raksasis were simply and helplessly working under the instructions of the evil Ravana as his servants and it is not right to punish them. At that time, she told the following story.

Once a hunter in the forest tripped and fell down while hunting a lion and lost his weapons.

The lion then started chasing the hunter.

The hunter ran and he climbed upon a tree.

On the tree he could see that there was a bear sitting. The man was completely helpless and he took shelter of the bear requesting the bear to spare his life.

Meanwhile the lion came to the bottom of the tree and instigated the bear to push the man down so that they can both eat the man.

The bear refused saying that the man has taken shelter of him and hence he would not push him down.

After sometime the bear started sleeping and the lion told the hunter, I am feeling very hungry. So you push the sleeping bear down from the tree so that I can kill and eat him and you can be relieved.

The ungrateful hunter, so much concerned about his own life, pushed the sleeping bear.

The bear somehow woke up while falling down and caught hold of a branch of the tree and was saved.

The lion told the bear that even though the bear tried to save the hunter, he was so ungrateful as to push him down. Hence the bear should now help the lion by pushing the hunter.

The saintly bear replied that great souls never have the inimical attitude towards others and it is their nature to be compassionate even if the others are of a bad nature. Thus the bear stood by its principles and did not harm the hunter who was greatly ashamed seeing the behaviour of the bear.

In the Srimad Bhagavatam we find that saintly Vidura gave good counsel to his brother Dhritarashtra and asked him to get rid of Duryodhana , the source of all trouble.

Hearing this, Duryodhana insulted Vidura very badly calling him a spy, infidel and he desired that Vidura be immediately put out of the palace. Thus being pierced by arrows through his ears and afflicted to the core of his heart, Vidura quit his brothers palace and went on a pilgrimage.

Dhritarashtra could not speak anything against his son.

It is unimaginable for any other person who has been subjected to such an insult to come back and do good for such a brother. But we find that Mahatma Vidura came back after having already adopted the renounced order of life, just for only one purpose and that is to deliver his elder brother.

Thus Mahatma Vidura, being treated just like a godly person by his kinsmen, remained there for a certain period just to rectify the mentality of his eldest brother and in this way bring happiness to all the others.

Such is the compassion of the great souls for all the conditioned living entities who have turned their faces away from Krishna. It is what the compassionate spiritual master does for all of us.