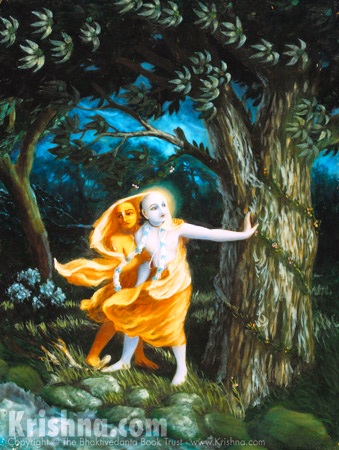 I will tell you a humorous story of why Sudama became so poor.

He was a comrade and a schoolmate of Sri Krishna. They were studying under the Guru Sandipani as students.

Among many other students, Sri Krishna, the little boy, and Sudama, another boy, and many others went to the forest for cutting wood.

That was the system of ancient Guru seva. Wherever there is a gurukula, the students are supposed to bring holy firewood from the forest for the performance of yajna or havana by the Guru.

Sudama is the oldest so Guru Patni gave Sudama a handful of chick peas she tied it in a bundle and gave it to this boy: “It may be raining; you may be cold and hungry. When you return in the evening, you will find it very difficult, so I will give you a bundle of this fried channa to share them equally.

Once they collected the wood they were returning home but it started to rain.

So they climbed a tree and thought they would stay there until the rain stopped.

So Sudama was siting on the highest branch of tree and the Balabhadra and then Krishna lower down.

Krishna heard and said, “Oh, you are eating something alone to yourself.” ” Sudama spoke “No, I am not eating. My teeth are chattering due to cold,” he said.

After some Krishna said to Sudama” what happen to the chick peas, I am hungry.”

Sudama apologies and said that he ate them by himself.

Krishna reminded Sudama that one should never eat alone but must always share food. This kind of selfishness can a be a down fall of ones way of life.

In life we should always share things. There is not so much pleasure when we enjoy by ourself but when we share things with others.

This deceptiveness that Sudama showed to a boy like Krishna made him utterly poor.

And he had to come for help from the very same person to whom he did not give a little channa. By this way Krishna wanted to show how law of karma work.

This is a story in the Puranas”.