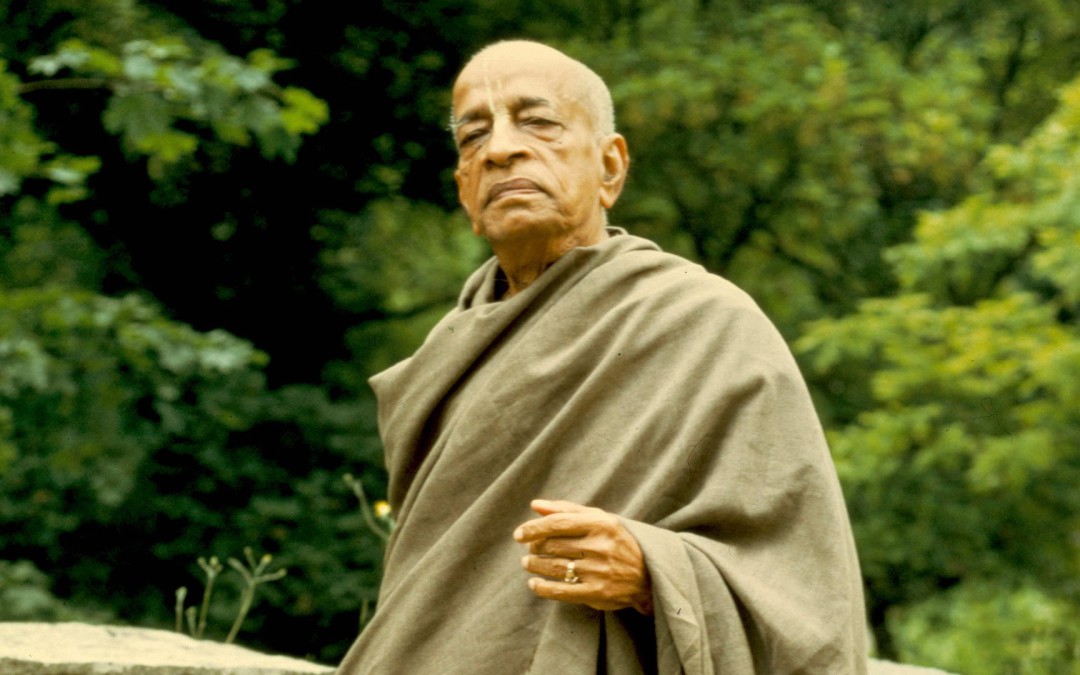 One night an extraordinary thing happened.

Prabhupada led the first kirtan and then gave a lecture.

I sat on the floor just to his right with the harmonium, and after the lecture, I began leading the second Hare Krishna kirtan.

All of a sudden, Srila Prabhupada’s voice cut through the auditorium with the potency of Lord Nrisimha, right in the middle of my chanting.

I had never heard Prabhupada do that, nor had I heard the words he chanted.

‘Narada Muni bhajaya vina radhika ramana namne,’ he sang. And then again he repeated it.

I looked up, and he looked down at me, signaling me to carry on.

So I continued chanting Hare Krishna, and he continued singing his prayer to Narada Muni into his microphone.

I closed my eyes and carried on, not knowing what was happening.

Then he started leading with me.

We could all understand that something inexplicable but amazing was happening.

We jumped off the stage and all of us began running around the perimeter of the auditorium with the audience.

It was one of those Krishna magic moments.

Just amazing! The next morning I asked what had happened the previous night.

During an ecstatic kirtan in Los Angeles temple Srila Prabhupada was laughing. Afterwards a devotee asked why he had been laughing and Prabhupada said, “I was laughing to see Narada Muni.”

“Yes, Narada Muni was there.”

What was Narada Muni doing?”

Prabhupada said, “He was laughing.”

The devotee said, “Why was he laughing?”

“He was laughing when he saw the mlecchas and chandalas dancing and chanting Hare Krishna.”

In London, at Bury Place, Prabhupada told devotees to put a small asana on the altar for Narada Muni because he was attending the kirtanas.

In America Prabhupada held a sparsely attended program but said that sage Narada was present.

Another time when the reporters came, this is recorded I’m pretty sure.

In the Berkeley temple in Prabhupada’s room where he was staying, some reporters came and some important folks and they were asking questions.

That was the period of time where the interviewer asked Prabhupada, “What will happen when you leave?

When you leave, what will happen to this movement?”

And that’s at the time where Prabhupada said that “My books will never die, they will live on for ten thousand years.”

But also during that darshan, it was exquisite because there was this practical interchange of how interviews go and all of a sudden Prabhupada looked up over everyone’s head into the corner, the exact corner of the room, and he said, “There’s Narada Muni.”

So Prabhupada saw Narada Muni during that time in that room.

“O Bhakti Devi, there is no age like Kali because you will be established in every house and in every heart. Hear my vow.

If I do not preach your message, subdue all other religions and make devotional festivals predominant, then I shall not be considered the servant of Lord Hari.

In Kali-yuga those people who follow you, even if they are sinful, will attain Lord Krishna’s abode without fear.

In every town and village of the world. My name will be heard.

Bhaktivinoda Thakura Thakura wrote in his magazine Sajjana-tosani, “Soon there will be a time when the chanting of Krishna’s name will be heard in England, France, Russia, Germany, and America.”

From the above passages we see how Srila Prabhupada’s glories and activities were foretold.

Srila Prabhupada made a perfect appearance, led a perfect life, and had a perfect departure.