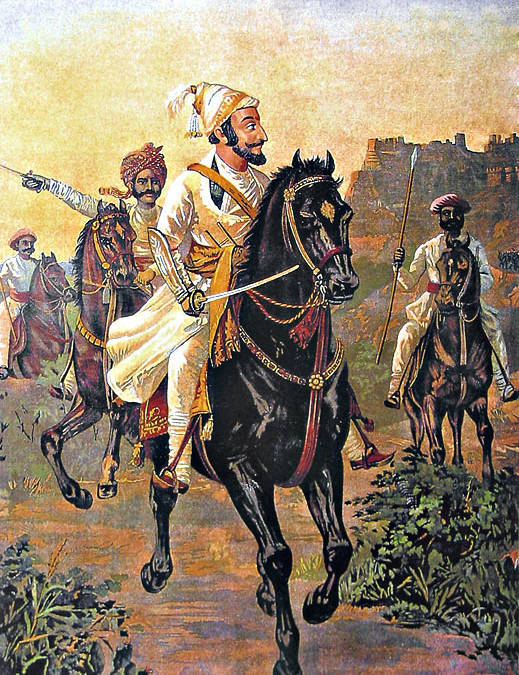 One Ekadasi day, Tuka was performing kirtans and Shivaji was listening to it with love.

In the meantime Muslim soldiers heard about the whereabouts of Shivaji and a big troop of 2000 soldiers came to arrest him.

They surrounded the house in which bhajans were performed and dint let anyone go in or come out of the house.

Shivajis informers came and whispered about the situation to him.

Hearing this Shivaji was worried and one of his bodyguards asked Tukaram if they could leave now.

Tukaram then told him that no one should leave till the kirtan is over.

Hearing this Shivaji sat down and continued to listen to the abhangs.

He thought to himself that none other than Vitthal can save him now and if he doesn’t, he would be fortunate to die on an ekadasi day listening to abhangs and in the company of sadhus and saints.

One of the Muslim spies came into the house to check if Shivaji was there and couldn’t find him.

He went back to his commander and told him that he couldn’t recognize which one of them was Shivaji.

On hearing this, the commander told him to get in and kill as many people as possible and that way they would definitely kill Shivaji.

Vitthal immediately took the form of Shivaji and came out of the house on a horse.

He then started riding his horse.

The soldiers who saw this started chasing him but no one was able to catch him.

The army was chasing him for several hours and finally they had travelled to a jungle about 40 miles trying to catch Vitthal who looked like Shivaji.

Vitthal suddenly disappeared and the soldiers blamed one another for not being able to catch Shivaji.

The commander just could not understand how an army of 2000 soldiers could not catch one person.

Vitthal then came and whispered to Tuka on what had happened and asked him to continue his abhangs without any fear.

Reflection on the story:

Often people on spiritual path have this doubt, If i am engage in spiritual activities will God solve my problems in life?

Again and again in life’s of devotees Krishna show that he is present and when is needed he will take proper steps to protect his devotees.

Sometimes we may have doubt in his actions but when we surrender to Him and his arrangements we can see that he will help as in best possible way.

He will help as to find solution which  we could not even remember.