Scenario #1: Should we go to a temple to worship or offer puja? 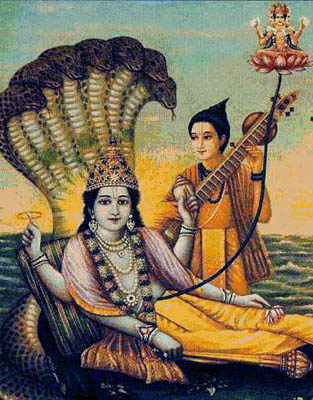 Narada, the saint, used to take a lot of pride in being a Vishnu bhakta.Once while wandering the earth chanting “Narayana Narayana”,he started believing that he was the only one who cares and worships Narayana while the rest were more interested in their day to day petty things. Next time he came to offer his worships to Narayana, Lord Vishnu asked if Narada had a little time to help Him carry out a delivery. Narada feeling with pride jumped in and asked what he had to deliver. Lord Vishnu asked Narada to circle the earth once while holding an earthen lamp filled with precious oil and
making sure to bring the lamp back without dropping the precious oil.

Next day morning Narada set out for circling the earth and at the end of the day brought back the lamp with the precious oil without dropping a single drop. Obviously Narada was all in smiles as he was chosen by Narayana for this task and he completed the task without losing a drop of oil. Narayana asked Narada to visit a poor farmer called “Jagga Dasa” next day and observe what he was up to and report Jagga’s daily activities to Him.With all devotion to Lord filled with arrogance of his devotion, Narada set out next day morning to observe Jagga Dasa.

Jagga Dasa woke up in the morning, finished his morning activities, fed the animal, and ate an early morning breakfast and left to work on the fields.Most of the day he worked in the field, came back in the evening,fed the animal, and ate a late supper before retiring for the day.Before he went to bed, he said “Oh Lord, please accept my Namaskar”.With that he started snoring as soon as his body touched the bed.

After Jagga Dasa retired, Narada left for the Vaikuntha and described the day to Lord. Narada was mad at Lord because Lord had asked him to observe a person who Narada believed was void of a single quality that could be common to all the devotees and that was respect for the Lord.Since Jagga Dasa did not take His name during the entire day, Narada was convinced that Jagga Dasa would be heading straight to hell.

After hearing Narada’s pitiful description of Jagga Dasa,Lord asked Narada why he was so mad at Jagga Dasa.Of course it was all to do with Jagga Dasa taking Lord’s name only once and that also before he retired for the day.At this time Lord asked Narada about the number of time Narada took Lord’s name while circling the earth holding the lamp.Of course, Narada had a good alibi that he was asked to make sure to bring the lamp back with the precious oil without losing a drop.While on such an important mission, he could not be expected to take the Lord’s name.

At this time Lord said with a big smile “Oh, sage Narada, you circled the earth with one lamp, while the poor Jagga Dasa is circling the earth 365 days with several lamps feeding his family,the animals, and community.Yet, Jagga Dasa had time to take My name once while you did not have time to take my name even once”. With this with all His love for Narada and the humanity He said

[Oh Narada, neither you would find Me in Vaikuntha nor you would get Me by following the wandering yogis, wherever My devotee calls for Me, I make
My self available to him.]