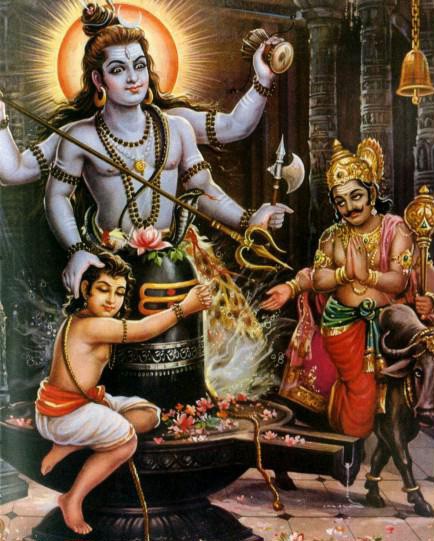 Sage Mrikandu was leading an ascetic life in a forest. His wife was Marudhvathi. They were childless for a long time. Mrikandu performed intense tapas for several years in order to please Lord Shiva to have childrens.

Lord Shiva in all his splendour appeared before him.

He said, “I am pleased by your devotion. Ask from me any boon you desire.” Mrikandu was overjoyed. He prayed to Lord Shiva thus: “O Lord! I am childless. Grant me a son.”

The sage Mrikandu did not hesitate over the choice. He did not want a worthless son. He begged only for the short-lived son of whom he could be proud. Lord Shiva granted the request of his devotee and departed.

After some time Marudhvathi conceived and gave birth to a son.

The parents were extremely happy about the new arrival whom they named ” Markandeya”.

When Markandeya was – five, Mrikandu arranged for his studies. Even in boyhood Markandeya mastered all the Vedas and Shastras. His pleasing ways endeared him to his teachers. The boy was liked by one and all.

When he reached the age of twelve, his parents arranged his Upanayana. He was initiated into the chanting of the mystic Gayatri Mantra. The boy was very regular in performing the Sandhya Vandana which pleased his parents and other elders. He was thus spending his days very happily, delighting everyone by his charming looks and pleasant behaviour.

But the parents were sad at heart and whenever they looked at their son a gloom spread over their face. They did not tell Markandeya that he was not destined to live long.

The sixteenth year was fast approaching. One day, unable to control their grief, they wept before him. Markandeya was surprised. He asked them gently the reason for their grief. Mrikandu, with tears running down his cheeks, said, “O my son! According to Lord Shiva’s boon you are destined to live only for sixteen years. How can we withstand this? We are helpless and do not know what to do.”

Markandeya consoled his parents saying that death was not a thing which wise people should dread. It is as natural as birth.

The next day the boy came to them and said, “Dear father and mother, do not worry for me. I am confident of winning over death. Pray bless me that I may succeed in my endeavor. Permit me to perform severe penance to please the Lord.” The parents blessed him heartily and sent him for penance.

Markandeya was to complete the sixteenth year on a certain day. Yama knew that Markandeya’s life was to come to an end. As usual Yama’s servants came to take his life. But they could not approach him for the radiation from him was too intense for them.

So, Yama, the God of Death, himself came on his wonted black buffalo. He had in his hand the well- known rope with a noose for taking out the young lad’s soul from his body and carrying it away. Yama saw the young devotee engaged in the worship of Lord Shiva. Yama could not let the worship be completed if his duty as the God of Death was to be properly performed.

Markandeya could not be allowed to live a minute longer after the completion of the sixteenth year. Normally invisible to human eyes, this time Yama had been forced to show himself to the young boy by virtue of the latter’s intense piety and devotion to God. Yama threw his rope with the loop and it went and encircled Markandeya’s neck and also the Shiva Linga.

The Shiva Linga at once split into two and out came Shiva, trident in hand. He pushed Yama aside and killed him to save the child. From that day onwards, Markandeya got the names Mrityunjaya and Kalakala.

After that at the request of other gods, Shiva restored life to Yama. Then, turning to the young devotee, with whose piety he was highly pleased, Lord Shiva blessed him with deathlessness. He said to Markandeya, “Every desire of yours will be fulfilled. You will never be old or grey – haired. You will live virtuous and famous till the end of the world. Omniscience will be an asset in you.”

To this day, the Hindus reckon Markandeya as one of their immortals. It is said that Markandeya is a great Chiranjivi, one who lives with the body forever and whose body always appears young, beautiful and saintly on account of his yogic powers. Markandeya has become proverbial for long life. The blessing of the elders even today is, “May you live like Markandeya, forever youthful and beautiful.” People believe that even now he is living somewhere in the Himalayas ill deep meditation for the good of the world.

For everything in life we need blessings. By taking shelter of superior personality we can do impossible things. Things who are above our power and abilitis.