Ramayana story: Why Hanuman is red? 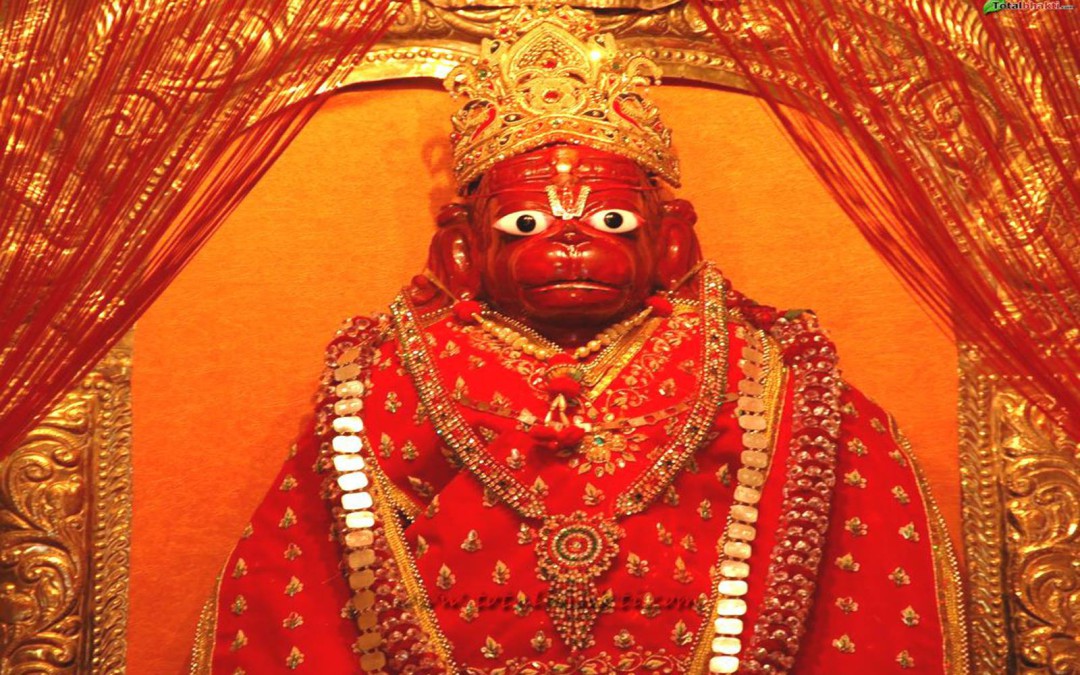 One day when Sita Matha was entering into Rama’s bedroom, Hanumanji also followed her.

Then Lord Rama said that he cannot enter into the room.

Hanumanji said that when Sita Matha can enter into the room, why can’t he enter the room.

He is having such an innocent devotional service towards Lord Rama. Just to convince Hanumanji.

Rama said that Sita is having a sindhur on her forehead, so she can enter the room.

After hearing that, Hanumanji came out and thought for a while.

Then Hanumanji concluded that sindhur is the qualification required to enter into Lord Rama’s bedroom.

So he decided to ask more about this sindhur to Sita Matha. Next day when Sita was in the dressing table, she was trying to keep sindhur, there came Hanumanji.

Sita Matha treated Hanumanji as her son because Sita and Rama did not have children for a long time.

Then Hanumanji asked Sita about the purpose and value of sindhur.

She understood what he wanted and smiled.

She said that she learnt from elders that if she keeps sindhur, it will elongate the life span of his prabhu. Sita matha did not mention her prabhu but she said Hanumanji’s prabhu. She very well know Hanumanji’s pure love towards Rama.

Hanumanji now understood the secret of this sindhur.

He immediately went to the market in search of sindhur and found one shop. He ran there and asked. The shopkeeper gave him little sindhur in a small box.

Hanumanji said that it is not enough. He just went into the shop, opened all the sacks of sindhur and poured all over his body. He poured some sindhur on the street and rolled over to cover his whole body, from head to toe with sindhur.

Then he came to the palace.

On seeing Hanumanji Sita matha started laughing loudly. She understood and told Rama that the previous day she told Hanumanji that the sindhur will increase the lifespan of his prabhu.

Hanumanji thought if a small amount of sindhur on Sita matha’s forehead can increase the lifespan of Rama, then how much it will increase if he puts all over his body. He thought that Rama can live eternally because of this sindhur applied throughout his body. This is the pure love Hanumanji had for Rama.

Hanumanji knows that Lord Rama is the Supreme Personality of Godhead. But still due to his unlimited love towards Rama, he thought that the sindhur kept throughout his body only will increase Rama’s lifespan.

We also sometimes behave like this. One day if we are late in offering bhog, we feel that Krishna is hungry, so we must prepare bhoga quickly.

But Krishna is beyond all these things. Due to our love towards Krishna, we feel like that. It means we are building a very nice relationship with the Lord.

“O Madhusudhana, because of your appearance, I am becoming more and more anxious in fear of Kamsa. Therefore, please arrange for that sinful Kamsa to be unable to understand that you have taken birth from my womb.”

Devaki was so afraid of Kamsa that she could not believe that Kamsa would be unable to kill Lord Vishnu, who was personally present”.

Devaki had pure love for Krishna that is why she was not able to understand that nobody can kill Krishna.

Hanumanji always introduces himself as the servant of Lord Rama.

He never introduced himself as ” I am Hanuman, I am so powerful etc”. He lives completely in the mood of servant to Rama.

We should always remember our eternal position as a servant of Lord. We must completely surrender to Lord Krishna and become His servant.