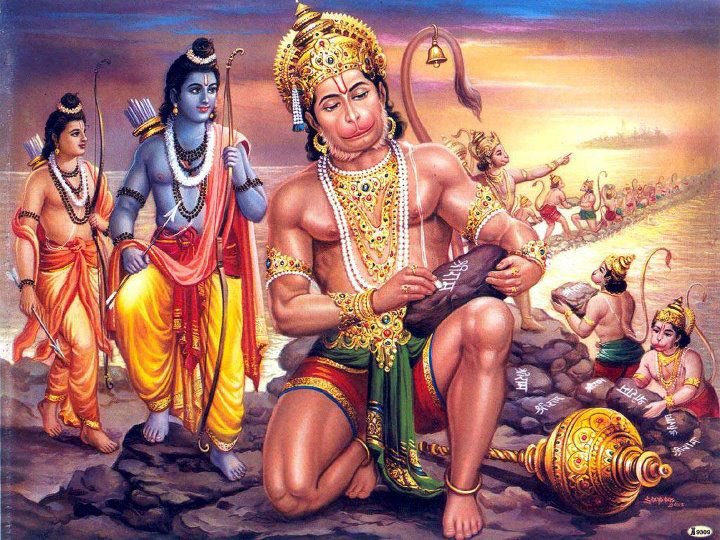 Ramachandra Bhagavan wanted to cross over from South India to Lanka in order to defeat Ravana, and He had to transport the monkey army also.

He thought that, as it is He can’t do anything.

And He cannot take all the monkeys across of ocean in between India and Lanka.

He thought that we must have a bridge so that everyone can cross.

So who can do it?

He called Hanuman and told him, “We want a bridge tomorrow ready.”

Hanuman knew that the Lord does not only order the living entities. But when He orders, He gives the strength also so that we can fulfill His desire. So he was sure.

He started to bring big mountains and stones from all over India and try to deposit them near the coast of the ocean. On each stone he was writing ‘Ram’ and he was throwing them in the ocean. And the stones were floating.

Lord Ramachandra was standing by the side. He was surprised that the stones were floating when they were thrown in the ocean.

Then Lord Ram wanted to try it Himself.

He thought, “If these stones are floating just by writing My name on it, then when I throw also they must float.”

So He picked up a big stone and threw it in to the ocean. It sank in the ocean. He thought that something must be wrong.

Again He picked up another stone and threw and again it went down.

Hanuman was watching Ram. He asked, ”What are you doing Bhagavan?”

Ram didn’t want to tell anything because He was not successful.

Hanuman said, “I know Bhagavan what you are doing. You must know these things better than me. I am bringing the stones and I am writing Your name on it. So Your association is there with the stone. Even the stone if it has the association of Krishna or Ram, it will definitely float. But when You throw the stone, You are rejecting the stone. So once You reject, how can they float?”

We should do anything and everything, but don’t get rejected by the Lord and Vaishnavas. When we are rejected then there is no hope for us.

The only way to avoid getting rejected by the Lord is to always chant His names and remember Him.

In Hindi there is a very nice bhajan. The poet says that name of Krishna is more powerful than Himself. This little story from Ramayana is a very nice example of this.

O my Lord, Your holy name alone can render all benediction to living beings, and thus You have hundreds and millions of names like Krishna and Govinda. In these transcendental names You have invested all Your transcendental energies. There are not even hard and fast rules for chanting these names. O my Lord, out of kindness You enable us to easily approach You by Your holy names, but I am so unfortunate that I have no attraction for them.