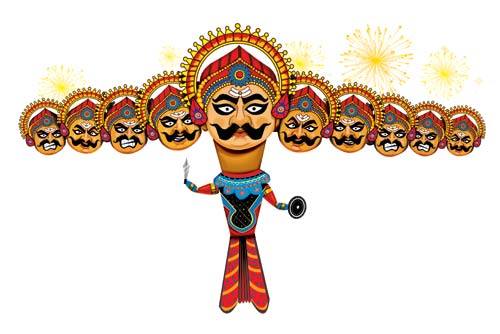 During the fight for Lanka, Ravana was feeling that he wasn’t going to win. So he went down to the lower planetary systems where Bali has his abode. He was thinking, “I’m not winning this battle, so let me get the help of Bali, the King of the demons.” So he went way down to the bottom of the universe where Bali is, and he tried to get in. But when he was trying to get in, there was a guard who kept stopping him. Every time he tried to get in, the guard would stop him. Ravana had many mystic powers, so in many ways he was trying to use his mystic powers to get in. So finally at the last moment he got in. He went to see Bali. Bali said, “What are you doing here?” Ravana replied, “There’s a tough fight up there. I’m fighting this ordinary human being.” Bali said, “But you’re a great raksasa. How could you have trouble fighting an ordinary human being?” Ravana replied, “I don’t know, but this person is displaying so many mystic powers, He has a huge army of monkeys and bears, so I’m having difficulty.” Bali said, “You fool, that’s Lord Ramacandra! He’s the Supreme Personality of Godhead, He’s not an ordinary man.”

Ravana said, “What are you talking about? He’s just an ordinary mortal. He’s just a foolish person. All I need is a little help from you and I can defeat Him.” And as much as Bali tried to preach to him, he couldn’t understand the glories of Lord Ramacandra. Bali said, “You’d better give up the fight now, because if you don’t, you’re going to lose everything. My advice to you is that you give Sita back to Ramacandra and stop the fight to save your life and your family and everything else.” But even with so much preaching, still Ravana couldn’t accept. So in order to try and impress upon him the greatness of the Lord, Bali said, “Come take a walk with me.” So they walked outside of the kingdom, and they saw a huge mountain. And the mountain was made of boulders of diamonds. “Look at this,” Bali said. “I’m going to give this to you. But I will only give it to you if you can lift it first.” So Ravana was trying, but he could just barely get it off the ground. Ravana was very powerful, but he couldn’t lift this mountain of diamonds. So Bali said, “Now step back a bit and take a better look at it. What does it look like?” So Ravana said, “It looks something like an earring, and earring studded with many beautiful diamonds.” So Bali said, “Yes, that’s right. This is the earring of Hiranyakasipu. During the fight between Hiranyakasipu and Lord Nrsimha, this earring fell down here. In your previous birth you were Hiranyakasipu, and the Lord killed you. You were much more powerful than you are now. You can’t even pick up this earring that you used to wear. Now Visnu has come again, and He will surely kill you.” But even after that example, Ravana couldn’t understand. He left, he went back to the fight and as we know he was defeated.

MORAL: No matter how much the demons hear the glory of the Lord, they never understand.