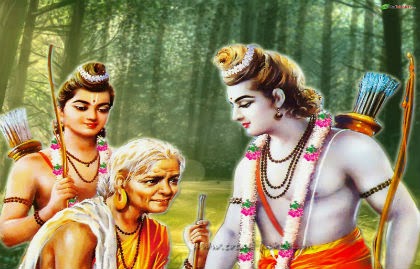 There was an young woman named Shabari who was a daughter of a hunter. She wasn’t a good looking woman, but her heart was pure gold. Before the day of her wedding she saw 1000s of goats and sheep that her father had brought to sacrifice, as it was a custom among the hunters of that time.

She couldn’t bear to see those animals being killed, so she ran away into the forest in the early morning to avoid the killing of those animals.

She went to many teachers and asked them to take her as their disciple and teach her ‘true wisdom’ (Brahma Jnana), all the teachers rejected her because she was of a low caste and wasn’t worthy to learn Brahma Jnana.

Sage Matanga welcome her and took her as his disciples, other rishis and yogis condemned him for taking an outcaste as the disciple, they criticized him, called him fallen, impure.

Sage Matanga told Shabari “Oh my daughter, stay in my Ashram, clean the place, take care of the chores, serve, it will do good to you.”

“You have come to me seeking the greatest, I’ll give you shelter” Sage was firm in his decision.

She was living peacefully in the Ashram, doing her daily duties, taking cows to the pastures and so on. Those rishis who were still ignorant rejected Shabari’s Guru, calling him an impure one.

One day when Sage Matang was very old he called his disciple Shabari and said “My Daughter, I’m leaving this body, is there anything you want me to do for you?”

Shabari prayed “Lord take me with you to the highest abode you are going. I can not live without you”

Sage Matanga said “Dear, One day Lord Rama will come to see you, until then stay alive, after that you can come to me”

There was a beautiful and grand lake called Pampasar near her Guru’s Ashram. Shabari who is now very old went to the lake with her pot made up of mud to collect water, there was a rishi sitting there with long beard and matted hairs chanting mantras, he was old and was reciting mantras wrongly, he heard this outcaste woman filling the divine water of the lake.

He thought “This low caste woman is making the water impure for our use” he threw a stone at her in anger, it hit her leg and the blood came out, a drop of blood fell into the lake, with seconds all the water in the lake became blood. Rishi started shouting loudly “Look, a drop of this outcaste’s blood has turned the whole lake into blood, what should we do now?”

Shabari went to her Ashram with her filled pot, still crying with pain. Rishis had no water to drink or to use for the sacred rites. They started chanting purification mantras, doing Yagnas and Havanas, throwing holy powders into the lake but nothing helped. Water still remained blood. They brought water from Ganga, it was of no use, thy brought Yamuna water, it was of no use.

Someone in the group said, “Lord Rama has come, he is wandering in the forest, he can help us, let’s go to him and pray him to turn this blood into water again”.

Rama came upon their request to Pama sarovar, it was red everywhere, rishis were all standing around him.

Rama asked “What can I do for you now?”

“Lord, touch of your feet will change this into water back” said the rishis.

Rama walked into the lake but the blood still stayed blood.

“Take a dip in it Lord” said the rishis gathered there.

Rama took a dip in it, but nothing changed..

“Lord, it is our last wish. Would you please clean your mouth with it and spit back into it” they requested.

Rama took the blood with both hands, “But this is blood brother” said Lakshman, Rama took blood in his mouth and spit it back, but that did not change the lake.

Rama asked them “Tell me How did it become blood?”

One of the rishis said “There was a sage living here, he had an outcaste disciple Shabari, he has died but she still lives, she came to fetch water from this lake, a rishi threw a stone at her, it injured her and a drop of her blood fell into the river, it turned all the water into blood”.

Rama on hearing the name of Shabari placed both of his hands on his heart and said “Oh rishis that was not Shabari’s blood,  that was the blood from my heart, I can not clean this.”

“Lord our life has become difficult, we can not live without this water”.

“I have come to see her, bring her to me, send someone to bring her”.

One of them went to Shabari and said “Lord Rama has come and he is requesting you”.

Shabari on hearing Lord Rama’s name came running to see him, rishis  thought her impure shadow should not touch the Lord and tried to stop her. The soil from her feet fell into the water as she was running hastily, blood turned back into water. Everyone was surprised and were asking themselves “What happened? what happened?”

Shabari prayed to Lord Rama “now, please come to my hut Lord, I have decorated it with flowers for you, I have brought sweet berries for you. Please come my Lord”.

Rama and Lakshman followed her to her hermitage, she brought them sweet berries in a bowl she had made with the leaves of a tree. Rama was pleased with the hard work she had gone through to bring him berries.

“Lord I have selected only the sweet berries for you, I tasted every berry to make sure I have only brought the sweetest berries, please take it my Lord”.

When Rama was about to take a berry Lakshman said “Brother these are half eaten, no good to eat”. Rama took a fruit and ate it, he said to Lakshman “Brother, these berries are so sweet, I have never tasted berries as sweet as Shabari’s berries. Whomsoever offers a fruit, a leaf, a flower or water with love, I take it with great joy”.

Rama was touched by her love, he saw the leaves she had used to make the bowl, he blessed the tree that the leaves naturally grow to become like bowls. Rama asked her “Ask me anything you wish, I’m pleased by your devotion”.

Shabari prayed only for pure devotion to Lord Rama “. Rama blesses her and leave. After this darshan Shabari’s body life ended and she achive Spiritual world and eternal abode of Sri Rama.

From this story we can learn few things:

1) No mater who i one and what is his origin he can achieve great spiritual advancement.

bring many blessing in our life and ultimately Lord will be happy with us.

3) It is not what we do or offer to the Lord, how big or small things and projects we do. What matter is with how much devotion we offer it to Lord Rama!