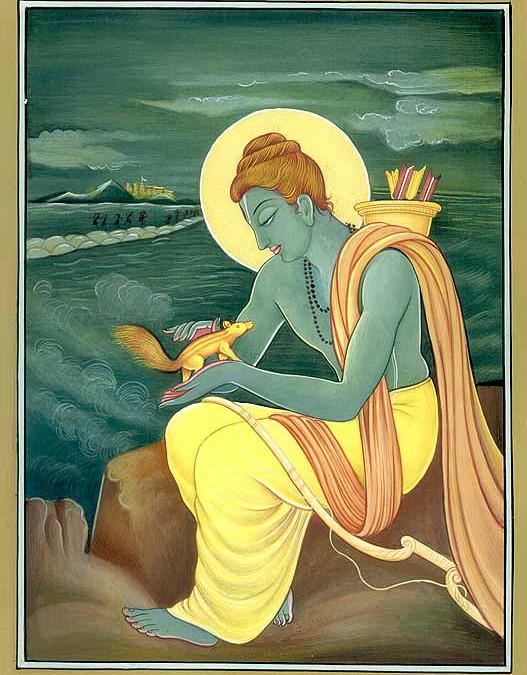 Here in a story from the Ramayana. Lord Rama and his army of monkeys were preparing for war with Ravana.

Rama asked his army to build the bridge over the sea. Work began at once on a stone bridge.

The monkeys pulled out rocks and heavy stones from the mountains, and carried them to the sea.

They cut them into shape and began to build the bridge. All this was very

difficult work and it took a long time.

Rama felt happy. “How hard they work! Their love for me makes them work like this,” thought Rama.

One day, Rama saw a small brown squirrel. He was going up and down the seashore with little pebbles in his mouth. The little squirrel could carry only little pebbles at a time in his small mouth. He carried the pebbles from the seashore and dropped them into the sea.

A great monkey was carrying a large heavy stone on his back and the squirrel came in his way.

The monkey jumped back. “Here, you little thing,” shouted the monkey in a voice like thunder, “you’re in my way, I stepped back and you’re alive now. But I nearly fell. And what are you doing here?”

The little squirrel looked up at the great monkey.

“I’m sorry you nearly fell, Brother Monkey,” he said in his small voice, “ but please always look where you are going. I’m helping Rama build the bridge. And I want to work hard for him.”

“You, what?” shouted the monkey and laughed aloud. “Did you hear that!” he said to the other monkeys. “The squirrel is building a bridge with his pebbles. Oh dear! Oh dear! I’ve never heard a funnier story.” The other monkeys laughed too.

The squirrel did not think this funny at all. He said, “Look, I can’t carry mountains or rocks. God gave me only a little strength. I can only carry pebbles. My heart cries out for Rama and I’ll do all I can for him.”

The monkeys said, “Don’t be foolish. Do you think you can help Rama? Do you

think we can build a bridge with pebbles? He has a big army to help him. Go home and don’t get in our way.”

“But I want to help, too,” said the squirrel and would not go.

He carried the pebbles again from the shore to the sea. The monkeys were angry and one of them picked up the squirrel by his tail and threw him far away.

The squirrel, crying out the name of Rama, fell into his hands.

Then Rama held the squirrel close to him.

He said to the monkeys, “Do not make fun of the weak and the small. Your strength or what you do is not important. What matter is your love. This little squirrel has love in his heart.”

“O Vanaras, you are brave and strong, and are doing a wonderful job bringing all these huge boulders and stones from far and dropping them in the ocean.

But did you notice that it is the tiny pebbles and stones brought by this small squirrel and some of the other smaller creatures which are filling the small gaps left between the huge stones?

Further, do you not realize that the tiny grains of sand brought by this squirrel are the ones which bind the whole structure and make it strong? Yet you scold this small creature and fling him away in anger!”

Hearing this, the Vanaras were ashamed, and bowed down their heads.

Rama continued, “Always remember, however small, every task is equally important. A project can never be completed by the main people alone. They need the support of all, and however small, an effort should always be appreciated!”

Rama then turned to the squirrel and said softly, “My dear squirrel, I am sorry for the hurt caused to you by my army, and thank you for the help you have rendered to me. Please go and continue your work happily.” Saying this, he gently stroked the back of the squirrel with his fingers, and three lines appeared where the Lord’s fingers had touched it.

Rama held the squirrel closer to him and said. “Little one, your love touches my heart.” He said these words and passed his fingers gently over the little squirrel’s back.

And when he put him down there were three white stripes on his back. These

were the marks of Lord Rama’s fingers.

No task and service to Sri Rama, however small, is unimportant! Every task should be looked upon as service to the Lord, and his blessings will always be with us. We should never forget that love and dedication is what matters to Lord Rama and not big services and show we make for our prestige.

Krishna just say that whatever we do big or small we offer to HIm. In Bhagavad-gita 9.27 Krishna says: