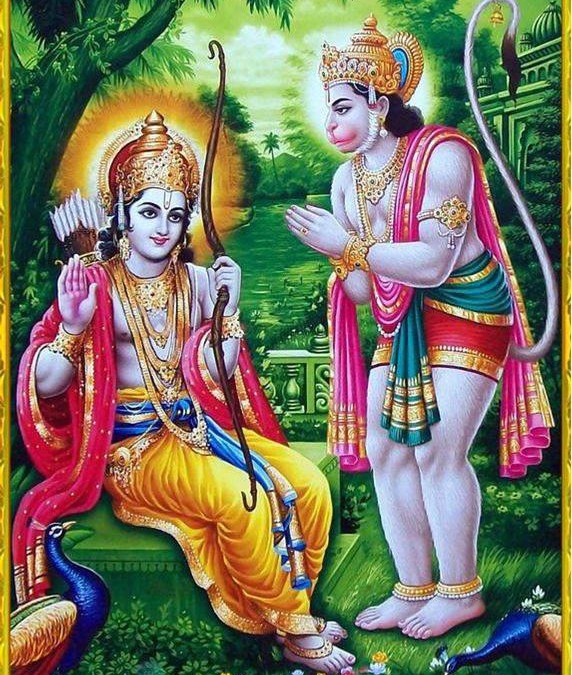 After the coronation was over, Hanumanji stayed in Ayodhya and showed so much of eagerness and engaged fully in doing all the services to Rama. There was no chance left for others to do any type of service to their beloved Lord Rama.

Lakshman, Bharata and Shatrugna felt that they were not able to serve at all. They asked Mother Sita to do something for this. Sita Devi said that she is also sailing in the same boat because she was also not able to serve her Prabhu.

They decided to make a service schedule and divide all the services among themselves and leave out Hanumanji. So all the four broke their heads and used all their intelligence and wrote all the services right from the morning till Lord Rama goes for rest.

They gave the service schedule to Sita Devi to get the approval from Lord Rama. She took the schedule to Rama. When Rama went through the schedule, he realized that no service was allowed to Hanumanji. He understood the feelings of His brothers and Sita Devi and the ploy behind leaving out Hanumanji. He also could visualize what is going to happen but He simply smiled and asked Sita what should He do. Sita Devi asked Lord Rama to just fix his signature and seal on the list so that it becomes an official order. Lord Rama did so and the list was displayed on the notice board.

Next day, Hanumanji innocently went to Lord Rama’s room to do service, to press Rama’s leg. Immediately Lakshman told Hanumanji that it is not his service and it is allotted to Shatrugna. Lakshman said that they have made a service schedule which is approved by Rama, so everything should go accordingly. Then Hanumanji saw the schedule. He found that no service was allotted to him. He started feeling and crying for being left out. After some time he consoled himself and asked Lakshman if he could do any service which is not mentioned in the list.

Lakshman also agreed to that because he was hundred percent confident that he has not left any service. After thinking for a while, Hanumanji said that he will do the yawning service. When the Lord yawns, he will snap his fingers to protect him from all the evil effects.

They did’nt know the seriousness of this service when they agreed. No body can predict when yawning comes so Hanumanji was always required to stay with Rama. He was always keeping his fingers ready to snap. He took his prasadam with his left hand and kept his right hand ready to snap when Rama yawns. That much he was determined in his service. Sita, Lakshman, Bharata and Shatrugna were completely bewildered at this turn of the situation.

Rama smiled inside and thought that all of their intelligence put together cannot equal Hanumanji’s intelligence. Then night came. Rama went to take rest in the bedroom. Hanumanji also followed Him. Sita Devi stopped him, reminding Hanumanji about her domain. But Hanumanji was so determined in his service that he said this yawning service is most required at night time and he has to be with the Lord and it is very much essential.

Seeing this discussion, Lord Rama asked Hanumanji to go and take rest. Having received the order, Hanumanji had no other option but to leave Lord Rama and go.

Yet he thought how he can continue his service without any break. So he went to the bedroom balcony and started snapping his fingers and chanting Rama’s name. Rama started yawning repeatedly. Soon Lord Rama’s mouth locked wide open in a monster yawn. He collapsed into a chair, pale with exhaustion. Then everybody came and all were perplexed. Sage Vasishta came, looked around and understood the situation and found that Hanumanji is missing in the arena.

They all searched and somehow located Hanumanji from the balcony and bought him. Hanumanji saw the condition of his Lord, and immediately stopped snapping his fingers and fell at the feet of Rama. Rama’s mouth closed only at that instant. Rama wanted to accept the service of his pure devotee. So it was not Hanuman’s snap for Rama’s yawn. It was Rama’s yawn for Hanuman’s snap. We have to see how the Lord reciprocates with His pure devotee. Then all the brothers and Sita Devi realized the determination of Hanumanji for loving service to his Lord and decided that they will not interfere in that.

In those days devotees were competing to do more service. But nowadays people are finding means for abstaining from doing any service. Hanumanji showed so much of eagerness to perform devotional service.

“O best among the vanaras, whoever has the four qualities of courage, vision, intelligence and expertise will never fail in any task.”

1. dhritih – Resolute or determined to the task
2. drshtih – Foresight
3. matih – Intelligence and analytical skills
4. daakshyam – Expertise or perfection in performing the activity

All these four qualities are required to complete both the material and spiritual activities successfully. We can see all these aspects in Hanumanji.