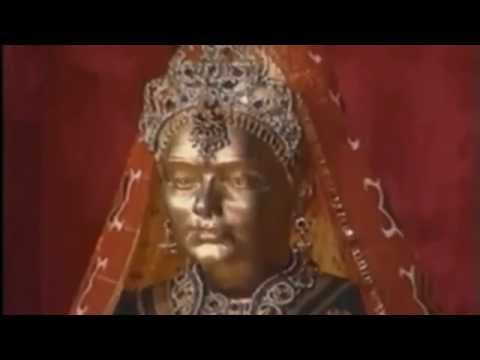 Once Lord Rama asked Lakshmana to leave Sita in the forest,(because one of His subject taunted at Him and just to prove that for an ideal king even His personal relation is not so important than His kingdom and His subjects, thereafter He remained alone without Sita).
As a King He has to perform many yajna for which, wife was essential.
When Vasistha Muni, His spritual master told Him that without a wife He cannot perform any yajnas, so either He should call back Sita or He should marry another wife at which Lord Ram flatly refused(as He is a Maryada Purushottam, He cannot marry antoher wife when Sita is there).
Then He asked Vasistha muni for an alternative, at which the muni told him that if he can get a statue of Sita Devi made out of pure gold then that statue can be treated as His better half and in this way the yajnas were performed.
Like this He performed many yajnas, and everytime He made a statue of Sita out of Gold.
When Lord Ram thought that now the time has come for Him to wind up His lila from this earth and go back to His abode “Ayodha dham”, at that time all these golden statue of Sita devi approached Lord Ram and told Him, “How can you leave us and go alone? Who will take care of us as all of us are your wife ? and as an ideal husband you have to take us along with you.”
At this Lord Ram felt very awkward, He said” How can I take you all as my wife ? I have my sita, and in this life I cannot take more than one wife, but I promise you all, that in my next incarnation, I will gladly accept you all as my wife, when I will come as Lord Krishna, and then you will all become my intimate gopis.
In this way, the Lord pacified those golden statues, and He left for His abode, and when He came again as Lord Krishna, He fulfilled their desire.
Moral of the story:
This is another example of how the Lord reciprocates …. like there are many more incidents which proves the Lord’s merciful nature toward His devotees, for whom He even takes pain, as in the case of Baali who came again in Dvapar yug as a hunter, who shot his arrow in the foot of Lord Krishna, since Lord Ram had killled Baali from behind the trees in Rama Lila.
This is the nature of Krishna he is equal to all and in same time respect law of karma and its working.
ye yathā māṁ prapadyante
tāṁs tathaiva bhajāmy aham
mama vartmānuvartante
manuṣyāḥ pārtha sarvaśaḥ
As all surrender unto Me, I reward them accordingly. Everyone follows My path in all respects, O son of Pṛthā.
Share to FacebookShare to Twitter