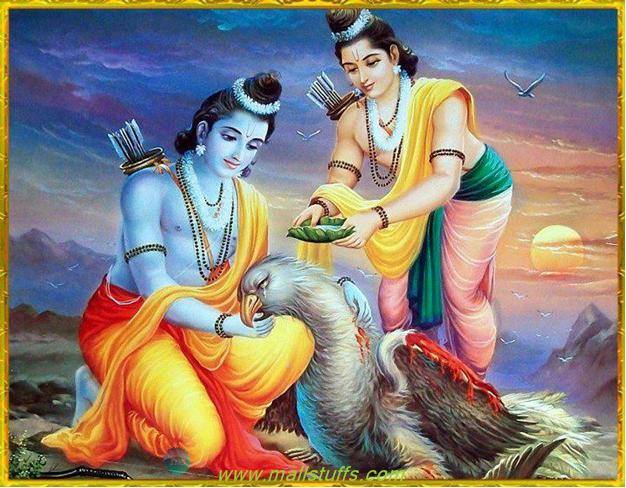 Jatayu was at the fag end of his life.

He was the old retired king of vultures and had no strength left.

But when he saw that Ravana was taking away what belongs to Lord Rama, he did not care about his senses, his body.

He just cared about his seva – service.

He transcended his pain, suffering, old age and infirmities to challenge Ravana to give back what rightfully is Lord Rama’s.

But what was the result of that great act? He was slaughtered.

His wings were cut and he fell down bleeding.

When Rama and Lakshmana came and saw this bird, they first thought it was Ravana or one of Ravana’s men.

Then they recognized him as Jatayu and then Jatayu described to Him that “I tried very hard my dear Rama, but my Lord, I am sorry. I failed in my endeavor. I tried to save Mother Sita but I could not save Her. I feel very bad that I have failed.”

Lord Rama told him in Ramayana, “You have actually won. You are victorious because it is not the result of the endeavor that I am worried about. It is your beautiful effort. You had all the disqualifications yet with all your disqualifications, you rendered service and you tried your best.

This is the qualification of a devotee. That is true nature of devotee that he does not think about his difficulties but he is concerned about what he can do for the pleasure of the Lord and the devotees.”

They may touch him just for a while but like Jatayu he endeavors in the service, uninterrupted, unmotivated (ahaituky apratihataa). In Jatayu’s service there was no motivation.

But he did that to serve the Lord and because he was unmotivated, the result of his service was uninterrupted. Why?

Because his destiny finally lay in the hands of Lord Rama.

Lord Rama tells Jatayu, “Today I will perform your funeral rites. I will do it as a son does for his father.”

Where will we get this bhaagya that the Lord does our funeral rites and for a bird, He did that. When He did all the funeral rites, like a loving son, Lord Rama told Lakshmana, “My dear brother, today is the most painful day of My life not because Sita mata has left, but because of the death of Jatayu.

A great service has been rendered by My dear most devotee Jatayu. His death has pained Me more than separation of Sita.”