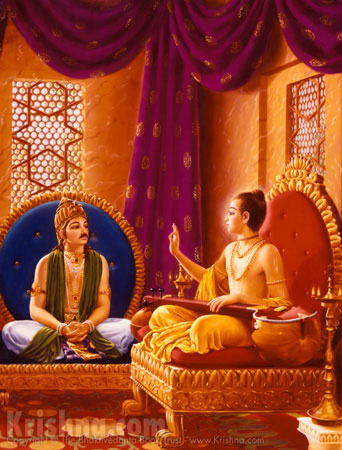 SB 4.25: The Descriptions of the Characteristics of King Purañjana

SB 4.26: King Purañjana Goes to the Forest to Hunt, and His Queen Becomes Angry 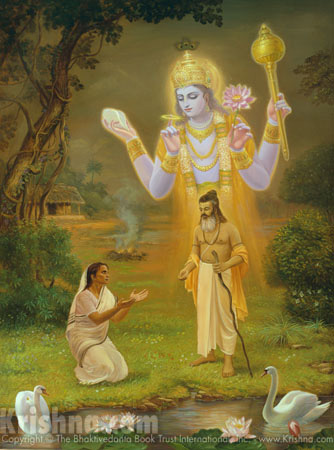 SB 4.28: Purañjana Becomes a Woman in the Next Life

SB 4.29.83 — My dear Vidura, one who hears this narration concerning the understanding of the living entity’s spiritual existence, as described by the great sage Nārada, or who relates it to others, will be liberated from the bodily conception of life.

SB 4.29.84 — This narration spoken by the great sage Nārada is full of the transcendental fame of the Supreme Personality of Godhead. Consequently this narration, when described, certainly sanctifies this material world. It purifies the heart of the living entity and helps him attain his spiritual identity. One who relates this transcendental narration will be liberated from all material bondage and will no longer have to wander within this material world.

SB 4.29.85 — The allegory of King Purañjana, described herein according to authority, was heard by me from my spiritual master, and it is full of spiritual knowledge. If one can understand the purpose of this allegory, he will certainly be relieved from the bodily conception and will clearly understand life after death. Although one may not understand what transmigration of the soul actually is, one can fully understand it by studying this narration.