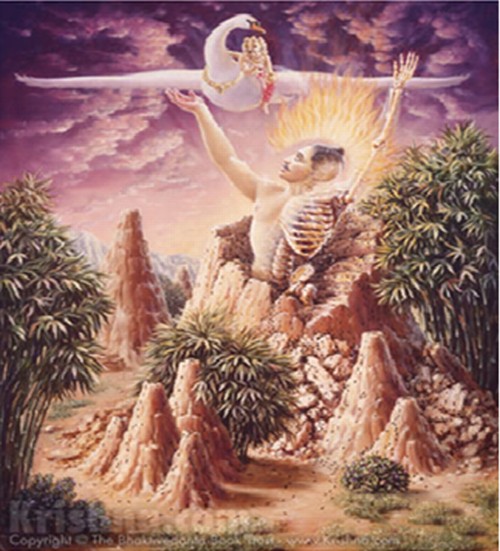 Hiranyakshipu once decided that he would go to the forest to perform penance.

When he set out, many omens indicating ill-fortune for one’s desired gain were observed. There were earthquakes, and fire was seen in all directions.

There, near the peak of Mount Kailash, Hiranyakshipu began performing rigorous austerities for the sake of  obtaining demoniac boons.

He thought to himself, “How can I dissuade this demon from his austerities?”

Just then, the great sage Narada, arrived at that place. Perceiving his father’s distress, Narada Muni said, “O revered father! You are a devotee of Lord Narayan. Why do you worry? Those persons who meditate on Govinda need not fear anything. I will persuade this demon to stop his penance. Lord Vishnu, the Lord of the universe, will guide me.”

Narada Muni then bowed down to his father and, accompanied by the sage Parvata Muni, left that place, absorbed in thoughts of Lord Vasudev.

Narada and Parvata Muni then assumed the form of sparrows and went to Kailash where Hiranyakshipu was practicing penance.

Seated on the branch of a tree, Narada Muni, in the form of a small sparrow, began to sweetly sing the holy names of Lord Narayan so that the demon Hiranyakshipu could hear him.

When Hiranyakshipu heard the holy name of Narayan spoken by the sparrow with so much devotion, he fell into a fit of rage and picked up his bow and arrows. No sooner had he fixed an arrow to his bow and aimed it at the two birds when Narada and Parvat Munis disguised as sparrows flew away.

Enraged at his failure to hit the birds, Hiranyakshipu left
the hermitage and returned to his capital city.

There in his palace, Hiranyakshipu met his beautiful wife named Kayadhu. It just so happened that her monthly courses had just ended and she had just taken bath.

Surprised to see her husband, Kayadhu inquired from him, “My Lord, when you left to perform your penance you told us that your austerities would continue for ten thousand years. O sovereign lord, how is it that you have given up your penance and returned early? Just out of my attachment for you I would like to know the fact of this matter.”

Hiranyakshipu replied, “O lovely lady, listen to me. I will tell you the truth why I gave up my vow. An incident occurred which enraged me very much, although the gods were no doubt delighted by it. O queen, in the great pleasure-grove on top of mount Kailash there appeared two small birds that were reciting the mantra, “namo narayanaya”. O gracious lady, after hearing their recitation two or three times I became angry and fixed an arrow to my bow. But just on the point of discharging the arrow the birds became frightened and flew away. Then, considering destiny to be all-powerful, I stopped my penances and returned here.”

After speaking with his wife Kayadhu, Hiranyakshipu engaged in sex life with her. As a result, Kayadhu conceived as her child the great devotee Prahlada Maharaja.

First Hiranyakshipu had heard the devotional recitation of the mantra, “namo narayanaya”, from the lips of the great devotee Narada Muni.

Then, just before uniting with his wife, Hiranyakshipu had repeated that mantra to Kayadhu.Then while engaging in sex wife with his wife he was always chanting mantra om namo naryanaya in his mind. The consequence was that the child born of them became a great devotee of Lord Krishna, Bhakta Prahlad.

In his purport to Srimad Bhagavatam 3.20.28 Srila Prabhupada comments: Before begetting a child, one has to sanctify his perplexed mind. When the parents engage their minds in the lotus feet of the Lord and in such a state the child is born, naturally good devotee children come; when the society is full of such good population, there is no trouble from demoniac mentalities.

Hiranyakshipu’s chanting was not devotional, nor was it directed toward the Lord. He chanted in a neglectful way. Hence it was only a shadow of the holy name, namabhasa.

There are four types of namabhasa. This namabhasa of Hiranyakshipu is known as helana, neglectful. The potency of the holy name is so great that even though Hiranyakshipu chanted in a neglectful way, the holy name sanctified his mind and as a result the great devotee Prahlada Maharaja took birth from his semen.

The holy name is so powerful that even chanting on the level of namabhasa gives immense benefit.

Liberation is the insignificant result derived from even a glimpse of the holy name. — Cc. antya 3.186