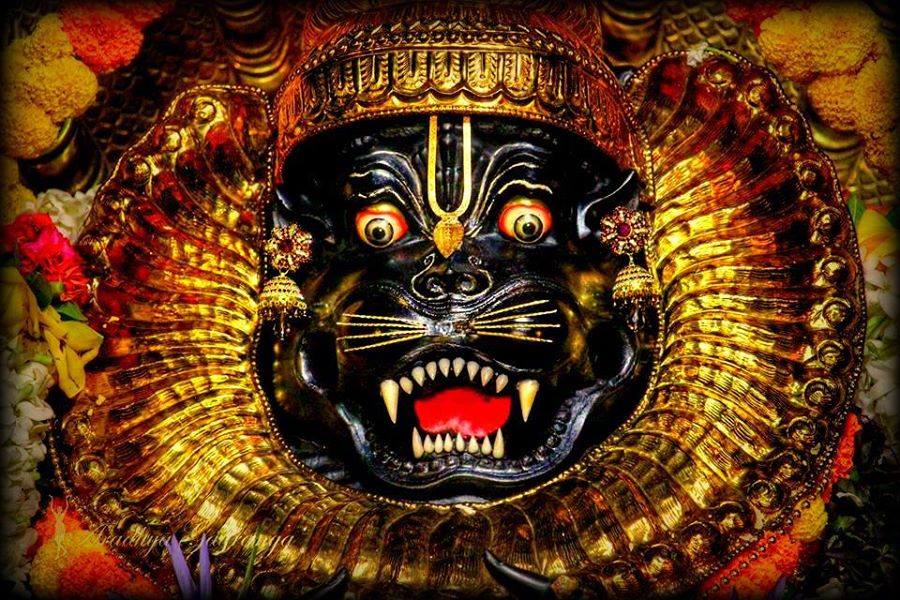 In the different Puranas there is different histories about Narasimha Dev.

In the Bhagwatan we have the most recent Narasimha avatar, but in Padma Purana also mentions about Narasimha Dev having appeared in previous Kalpas for slightly different pastimes.

At one time Hiranyakashipu appeared and he was worshipping Shiva and to get the blessings. So he told his son Prahlad that you should accept me as Supreme. He said I can’t do that. I always accept Siva……

So some other times also Hiranyakashipu worshipped Brahma. If I remember, he has slightly different boons. One time he did not in this yuga, he has in this kalpa, he has what that I won’t be killed inside or outside, but in one pastime he didn’t ask for that. So instead what he did is, he told Prahlad that you have to accept me as Supreme by 6’o clock. Tonight. If you don’t do that then I will kill you. So like that it is slightly different.

He tried so many ways, more or less other ways, more or less same but one time ,Hiranyakashipu, he thought that he can’t kill this guy, can’t kill him, and let us just get him out of the way. So he put him in the bottom of the ocean and covered him with mountains of stones, of boulders. Have you heard about that one…? He was just like piled up with one whole mountain may be 500 or 1000 meters or more maybe- a stone mountain. He thought OK now at least he won’t bother us anymore, he won’t tell us about Vishnu. So then because Prahlad became heavier than the heaviest and lighter than the lightest. So he became very light, he became so light that he was coming up through the boulders and pushing them aside and finally he is floating on the sea tub. So then he swam to the shore and went in to see his father again who was like ‘Why is it that you don’t die, why don’t you die’. He said I don’t die for the same reason I am also protected by Vishnu. So finally so many things like this happened.

Of course in the Bhagwatam it explains that they thought to give Prahlad another chance. So they said go in to the school again. Some Vaishnava must be going into the school and teaching him. So we will put the secret police, the top army- anti terrorists around the school. If any Vaishnava comes near the school, shoot! kill outside. Then he won’t be contaminated anymore but ofcourse he was the Viashnava himself. He was trained. ‘When was he trained’? In the womb of his mother. (The students don’t know that?). Narada Muni was teaching his mother, he was in the womb and so he got trained up before birth. So like that. he got all the other students to chant Hare Krsna Hare Krsna Krsna Krsna Hare Hare, Hare Rama Hare Rama Rama Rama Hare Hare.

Finally, so many things like this happened. The Padma Purana says this time Hiranyakasipu had built a big stadium, like a huge pavilion, so huge that it was more than a 100 kms long and 50 wide and very high, even there could be aeroplanes inside. It was climate controlled. So you will always feel comfortable inside. Never too hot and never too cold. If anyone felt sick and they go inside the pavilion they will feel healthy. There was a nice buffet of all kinds of edibles. So if you are hungry you go and eat. So all of these facilities for nice sense gratification

On one side there was big dais like a high raised place and there was a gigantic throne for Hiranyakashipu. People would come there. So much sense gratification from him and they would worship him.

Glories to Hiranyakashipu! We love you. Give us more sense gratification! (laughter) ‘true love’. Right? He was popular amongst many people. So there was little Prahlad up next to the throne on the huge dais and he said he got till 6’o clock and then I finish you. He asked if the Lord is going to come. He said ‘Of course He will come’.

This time there was no pillar. So then Lord Narasimha Dev went to the city and he was walking, walking and flying. People were seeing him. All the demons living in the capital city of Hiranyakashipu. They were very afraid. Who is this half man and half lion? They were running. Then he went into the pavilion. Then he was flying in his gigantic form on the back. Then Hiranyakashipu told his air force to go and tell this beast to get out. We don’t allow beasts in here and if he does not leave just kill him. So jets went over there to stop him, but he did not stop. Suddenly he spread his hair, his kesha, his mane. One of those jets hit the hair of Narasimha Dev. Swishhhhhhhhhhhhhh….the jet became ashes. So the whole air force of Hiranyakahipu was turned into ashes. Then Hiranyakashipu sent missiles, many missiles. So some of them hit his hair, it got twisted, some he caught and threw it down…swishhhhhh…but nothing was harming Narasimha Dev and finally all the weapons, all the air force, everything was finished. So then he went to Hiranyakashipu and said you all have to attack. Then they had this arial fight and everyone was watching Hiranyakashipu fighting with Narasimha Dev. So then one time Narasimha caught him and let him go waiting for just the right moment not during the day or night. So when the right moment came Narasimhadev picked him up and he sat down on his throne and swishhhhhhhh…..bifurcated him. So like this slightly different. Ultimate result is the same. Prahlad was offering him prayers.