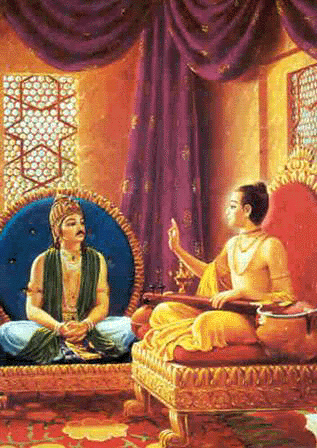 Long ago there lived a king Prachinabarhi. He wanted to gain the pure wisdom through which he can be freed from the bonds of Karma. He approches Narada to gain the same. Narada starts reciting the following story to Prachinabarhi :

Once there lived two friends named Puranjana and Avigyathan. Both of them were of the same age. They were brilliant, had freedom, were happy and were together always. Both of them were traveling around happily. While wandering puranjanan once saw a palace with nine gates. It was in the foothills of Himalayas. It was named Nawadwarapuri. When he saw this palace he completely forgot about his friend and fell in love with it. He then saw a lady emerging from the fort. The lady had five headed snake as an umbrella, had 11 body guards and loads of soldiers accompanying her. Puranjanan was totally impressed with her beauty and he approached her. He enquired about her. She told him that she was the queen of this palace and that she is going in search for a suitable groom for her to get married. The queen introduced herself as puranjani. Puranjanan and Puranjani decide to get married. They get married and start living together in Nawadwarapuri. Puranjanan follows whatever Puranjani says. They were living happily. <p> </p> <p>There was a female named durbagai. She was Kaalan’s daughter. Nobody liked her. She was searching for a person to get married to. One day she met Narada Muni and asked him to marry her. Narad refused to and so she cursed him saying that he would have to keep on traveling through out this life and he would not be able to stay put in one place. Narad tells her that there is a person named ChandaVegan whom she can marry. She then approches chandavegan and asks him to marry her. He tells her , “You are already 85 yrs old. Why should you marry? I will always keep you with me” . Chandavegan has a brother called Prajvaran and a most important soldier Bayan. All the four of them together with Durbagai’s father Kaalan decide to go and capture palaces. Whenever they capture a fort it becomes completely useless. While capturing different forts once they entered Nawadwarapuri. First Dubagai steps into the palace. She kills the five headed snake. Prajvaran comes and burns the place. Bayan enters Puranjanan’s private space.Kaalan also entered. Puranjanan and Puranjani cried and then puranjanan was killed. He died thinking about puranjani.</p> As he died thinking about a lady he takes birth as a lady. She is born as the daughter of Vidharbha Desa’s king. She gets married to a Pandiya Rajan called Malaiyathvajan . After a few years the king left his kingdom and went to the forest. She also followed her husband. In the forest Malaiyathvajan did Tapas and died one day. She ignited his body and wants to follow him. Hence she was about to fall into the same when a scholarly Brahmin came there and stopped her. He explained to her that she was actually puranjanan who got separated from his friend avigyathan. He says that you got married to puranjani and died thinking about her. So you were born as a princess. Now you will die thinking about your husband and you would again take birth as a guy. This cycle will keep on moving and you would never be able to attain salvation. She then remembers everything and asks the Brahmin where his friend Avigyathan is. The Brahmin then takes the form of avigyathan. Avigyathan tells puranjanan not to be carried away by any Nawadwarapuri now and both again start being together happily. <p> </p> Hearing this story Prachinabarhi was perplexed and pleads Narad to explain the meaning. Narad then Narates the essence of the Story. <p> </p> Essence of the story: <p> </p> <p>Puranjanan is Jeevan, Avigyathan is the unknown one (The supreme Personality of Godhead) Who cannot be understood. Nawadwarapuri said in this story is the human body. When puranjanan wants to live in that body he forgets  The supreme Personality of Godhead . The Queen of the fort puranjani is actually your Buddhi. Body is attached to I & Mine.</p> The five headed snake which was said to be an umbrella is actually Panjapranan => Pranan, Apanan, Vyanan, Udhanan and Samanan.. The 11 body guards where Jnanendriyangal -5 ,karmendriyangal -5 mind -1 — 11 endriyam. <p>Loads of Soldiers is the loads of thoughts our mind has. When Jeevan enters the body he is controlled by all this. Durbagai whom we described as a female of 85 yrs is actually Ageing. When we said that Narad said he won’t marry her, it indirectly means that he will always be young. He won over Age. Narad being ‘Trilogasanchari’ is never in one place and that was only explained as a curse.</p> <p> </p> Chandavegan is actually lifespan and Prajvaran is fever and Bayan is the frightening feeling that our life would come to an end. The four start capturing bodies. When we say that Durbagai first stepped in it means that human beings become aged. When they become aged they become useless. The body becomes the place for all illness to stay. We get afraid about our end. And at last our death (Kaalan) comes. When we die whatever we think , we are born as that in our next birth. The whole cycle repeats itself. To break this cycle and reach the lotus feet of God we need the help of a guru. When he gets a guru, he is attached to him. When the guru reaches God he also wants to follow the Guru. At that time God himself comes as the guru and takes us to his lotus feet asking us not to get attracted to Human bodies again. <p> </p> <p>This is the essence of our life</p> <p> </p> Note: