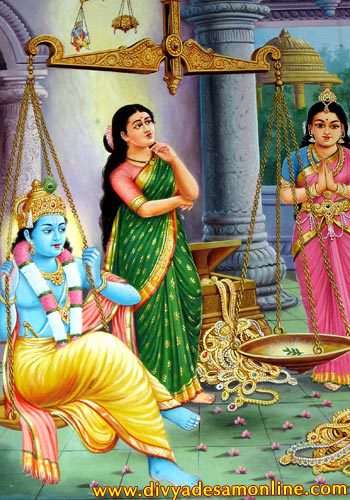 Sathyabama was the beautiful daughter of Satrajith, the owner of the sacred Syamantaka jewel.
She was little haughty and proud of her royal lineage and good looks. She prided herself on her pure love for Krishna and yet she was jealous of Rukmini, the goddess of wealth incarnate.
Rukmini on the other hand, being the first queen of Dwaraka was a very humble lady and a pious wife. She let nothing come in the way of her devotion to Krishna and served him with whole hearted love and devotion.
But Krishna is one who is known as destroyer of his devotees pride.
One day, the divine sage Narada, the creator of mischief, came to Dwaraka to offer his salutations to Sri Krishna.
In the courtyard he met Satyabhama, beautifying herself with some flowers on her tresses for pleasure of Krishna. Narada walked up to her and with a voice of absolute innocence asked her, “Rani Satyabhama, dont doubt my intentions, but is it my old age or is it really true that Krishna loves Rukmini more than you?”
Sathyabhama was thoroughly shaken and stood still, gaping at Narada.
”You are far more beautiful and charming than her. You are the younger queen. Dont you think you deserve more attention?”, prodded Narada again.
Pulling herself together, Satyabhama looked inquisitively at Narada, “Tell me divine sage, what should I do to gain his undivided attention? You are my only hope now”, she pleaded to him.
Narada, ever eager to cause confusion told, “That is my whole point of visit, mother. I have a first-class plan all hatched up to bring Krishna back to you.”
Satyabhama’s eyes were twinkling and she listened to Narada with rapt attention.”
You will now make a vow, that you will hand over Krishna to me as a slave. Then to keep the sanctity of the vow but also to retain Krishna to yourself, I will allow you to trade him in for an equivalent weight of your riches.
Seeing that you are willing to trade in your wealth for him, Krishna will admire you for your sacrifice and will keep you close to him. The only hitch is that I do not know if your wealth will suffice to balance out Krishna’s weight”, Narada asked sceptically.
Proud as ever, Satyabhama flared up, “I am the daughter of Satrajith. My wealth is limitless. I am sure that I have enough to balance Krishna. We will carry on with this plan of yours.”  And that,was exactly what Narada wanted.
Satyabhama rushed to Krishna and hurriedly told him about her unfortunate vow to Narada.
Krishna patiently listened to her and very meekly nodded his head.
Satyabhama then commanded one of the servants to bring out the large scales used to weigh grains and groceries.
She also sent the Caretaker of the Coffers to bring out all her jewels and gold to the grand court room. And gently leading Krishna, she went to the Courtroom.
All the ministers stared at the scales that had been placed at the center of the court. Their mouths further fell when they saw box after box of gold being carried inside.
Krishna was silent throughout the entire time.
So great was the uproar of surprise at the court that Krishna’s other queens too hurried from their Anthapuram to the main court.
Amidst all the courtiers and with Krishna himself as the witness,
Satyabhama gave away Krishna in dhaana to Narada.
The other wives of Krishna were shocked at this, but being ever dutiful, they did not speak out in front of the assembled court.
Narada then gave her the option of taking back Krishna but instead presenting him with an equivalent weight of riches. Amidst loud sighs of relief, Satyabhama agreed to it.
She then placed Krishna on one plate of the Scales and with a smirk on her face started piling up the gold, jewels and gemstones on the other plate.
She kept adding more and more of her wealth, but the pan with Krishna did not even budge. To top it all Narada kept giving her ominous warnings, “Remember devi, if you fail to supply me with sufficient wealth, Krishna will forever be a slave to me. I can even bid him out to anyone I want.”
Satyabhama freaked out and swallowing her pride, begged the other wives of Krishna to give her their jewels so thet they could retain Krishna.
Out of their devotion to their lord,, the wives removed every gold ornament on their body until they were wearing only the Mangalsutra. But the scale showed no signs of motion.
Krishna, always the sly cowherd, “Look Satyabhama, because of your stupid vow, I have to be a slave to this rishi”, he complained.
Satyabhama was at a loss for words when Krishna continued, “Why dont you ask Rukmini. She must be able to get us out of this predicament”, he suggested coyly.
Satyabhama was in such a state that all her ill will towards Rukmini flew out of the window.
Rushing to Rukmini’s private chambers she poured out the dire state of matters.
Rukmini, ever calm, didnt panic and came along with Satyabhama. On the way she passed the sacred Tulasi Maadam and plucking a single leaf of Tulasi [Sacred Basil], she continued her way to the hall. She very quietly walked towards the balance and praying to Krishna, placed the single tulasi leaf on all the piled up wealth. Lo and Behold! The pan containing Krishna flew up and remained underbalanced. Shocked at this, Satyabhama looked to Krishna for explanation. “Try removing your riches, Bhama,” Krishna told her, all smiles.

With a very sceptical expression on her face she removed all her riches until nothing but the single tulasi leaf sat on the pan.
And yet, it weighed more than Krishna. She was stunned and humbled. Krishna jumped down from his high hanging pan and came to her, “Sathyabama, you gave all your riches to me, but there was no devotion in that offering. Just the feeling of possessiveness. When you made your offerings with such a thought in your mind, they lost their value and became mundane things.
On the other hand Rukmini offered just a single tulasi leaf. But her intentions were noble. She made the offering with utmost love and devotion towards me. And that single leaf was sufficient to please me beyond expectations.
Remember it is not the offering that matters, but the love and devotion with which you do it, that does.”
Then leaving Satyabhama standing stunned in the court, Krishna returned to his chambers with hss other wives.
Turning to Narada, her eyes now shining bright with tears, Bhama said, “Devarishi, thank you for teaching me this hard learnt lesson today. I will never ever underestimate the power of devotion and love towards the lord.” Narada nodded and with his characteristic singing Narayana-Narayana, and he was gone.
And thus ends the leela of Sathyabama’s lesson and thus begins the new custom of offering Tulabharam to the Lord in his temples. But let us all remember, that it is not so much as the value of the offerings that matter, as the love with which you offer it to the god almighty. After all, Love ‘IS’ God.